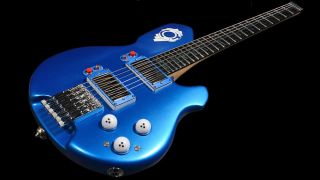 As any musician who has visited Japan will attest, Tokyo's TC-Gakki store is something of a mecca for guitar tourists, thanks to walls of rare models and used bargains, but the shop also produces the occasional instrument of its own - and as you'll see from this Ghost In The Shell-inspired electric, they certainly stand out from the usual fare.

Based on Tachikoma - the artificial intelligence combat vehicle that appears in the manga, anime and forthcoming Scarlett Johansson-led film - this hand-crafted guitar is one of the most faithful media tie-ins we've seen yet.

Round volume/tone knobs mirror the Tachikoma's eyes, while on/off switches for each pickup and a neon-light fretboard continue the theme - the guitar's body also bears the logo of the series' counter-cyberterrorist organisation Public Security Section 9, and a rear-mounted metal plate reads 'Ghost In The Shell (Stand Alone Complex)'.

Spec-wise, the Tachikoma GT is notable for a maple neck-through basswood body (the maple itself is visible from the rear), DiMarzio DP-193 and DP-161 humbuckers and an ARM bridge tuning system, which is required since the guitar doesn't have a headstock - after all, nothing says futuristic like a headless design.