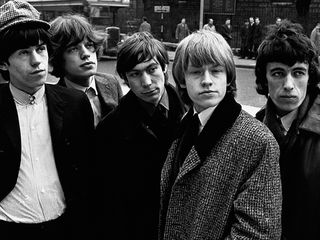 The Rolling Stones in 1964. Their 50-year-career will be the subject of a new documentary. © Hulton-Deutsch Collection/CORBIS

We didn't think there was anything new to tell in the tale of The Rolling Stones, but apparently there is - much more, in fact. The band has announced plans to release a still-untitled, career-spanning documentary film in September, one which will include extensive use of previously unseen footage from the band's personal archives.

Brett Morgen, who directed The Kid Stays in the Picture, has been tapped for the project, which is set to be finished by September and coincides with The Rolling Stones' 50th anniversary celebrations.

"For anyone who wants to experience the band, this is the film that will defy convention and create a sonic tapestry to transport viewers into the world of the Rolling Stones," Morgen said in a statement. "The film will deliver the original, bold, sexy and dangerous flavor of the iconic rock band."

Although there have been other documentaries on the Stones, Morgen says that his will tell the band's story as a true narrative. "We've been looking under every rock going through their archives," he said to Rolling Stone. "It will be music never heard before, and I've conducted 50-plus hours of interviews so far. By the time we're done, they will be the most extensive group interviews they've ever done.

He added, "I'm not a historian or a journalist, so I'm interested in mythology and film-making and creating something that feels really cinematic. The way I sort of see this film is it's like bottling up the essence of the Rolling Stones in a film."

With the project still months away from completion, one person is already impressed with Morgen's work: Keith Richards. Speaking to Rolling Stone, he said, "[Morgen] told me 80 percent of the footage has never been seen before, which amazes me. I didn't know there was that much around."