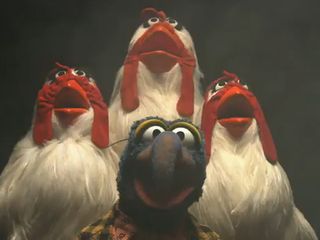 The Muppets doing Bohemian Rhapsody? Is this just fantasy? Nope. To mark the 18th anniversary of Freddie Mercury's death (24 November 1991), Miggy Piggy, Animal and 60 or so other Muppet friends throw down in grand style on Queen's baroque classic.

Already the video (see it below) has become a must-see sensation: in just three days it's been viewed by over three million people, and no telling where it's going to stop. Ahhh, the power of Queen! The power of The Muppets!

Guitar fans waiting for Brian May's explosive riffs and solo (the man does know a thing or two about riffs) won't be sorry, but we do have to take issue with the appearance of a Les Paul - c'mon, where's the Red Special?

Other than that, it's one heck of a celebration. And somewhere Freddie Mercury is smiling knowing that Miss Piggy, sprawled out on a grand piano, delivers his famous line, "Nothing really matters...but moi?"