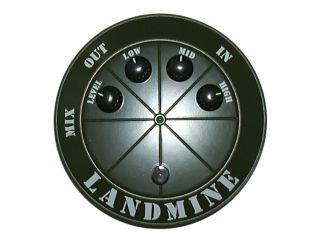 You want a distortion pedal with serious bombastic tone. What's more, you want one that actually looks like a bomb. Well, you're in luck! The Landmine Pedal Co. of Ontario, Canada, has a hot seller on its hands with the LD-1 Landmine analog distortion pedal.

The Landmine Pedal Co. was launched as a result of owner Mike Palermo's personal need for a very high-quality, hand-built, reliable, and damage-proof effects pedal. Admitting that its "landmine" design is gimmicky, he says, "I was just so sick of every pedal on the market looking exactly the same. Landmine pedals sound different and look different; they it stand out -- and most important, people love them."

The Landmine has controls for level, low, mid and high adjustment, plus amp and mixer outputs that can be used simultaneously. All lettering is appropriately painted with a military-style stencil. Capable of producing pulverizing low-end, ass-tackling midrange, and your-hair's-on-fire top frequencies, this is one pedal that isn't for the faint of heart.

If you're tired of so many pedals that look and sound the same and want to try a boutique overdrive that will kick a donkey's ass, step on this little baby and stand back.

And hey, check out this cool video of some dude playing Van Halen's "Panama" using the Landmine pedal. Now, aren't you just a wee bit jealous?