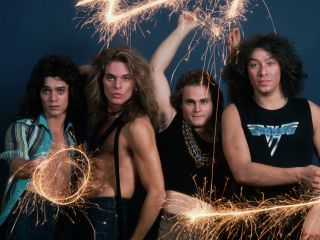 Van Halen in 1978, in a pose apparently not inspired by The Kinks (Image credit: Lynn Goldsmith/Corbis)

Van Halen had one of their first hits with a cover of The Kinks' You Really Got Me, and now, 32 years later, Dave Davies is finally offering an opinion. And his overall feeling is that Eddie Van Halen played better guitar when he was hitting the bottle.

In an interview with Classic Rock, Davies, who founded The Kinks in 1963 (his brother Ray would join soon after and become the band's de facto leader), indicated that he wasn't overly fond of VH's over-the-top take on the 1964 classic.

"Van Halen's version was very Middle America," Davies said. "It was like, 'Hey man, look at me with my tight trousers! Here's our version of You Really Got Me!'"

Regarding Eddie Van Halen's blistering hammer-on style of guitar playing, Davies said, "There's the thing: good art isn't always about having the comfiest technique. I shouldn't encourage him, but I'm sure Eddie Van Halen played better when he was drunk. But it must be a good record if people like it."

According to Davies, the timing of VH's cover was a sore point for his group: "We got pissed off though, when we played America. The Kinks had an album out called Low Budget [1979] and we ended up touring and playing stadiums. Some kid came up to me after one of the gigs and said, 'I like your cover of Van Halen's You Really Got Me.' You have to smile sometimes."

So what do you think? Of the two, which is better?