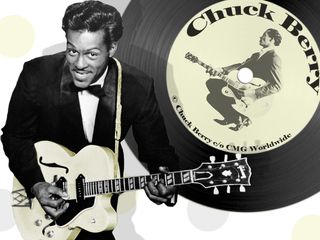 Chuck Berry's Johnny B Goode has been voted the greatest guitar song of all time.

US magazine Rolling Stone has been up to its list-making badness once again, This time they have judged what are the 100 greatest guitar songs of all time. It´s a pretty conservative list all round with only two tracks in the Top 10 from the last 30 years, but MusicRadar is still amazed at some of the choices.

The Top 10 is below. Are these supposed to be the greatest riffs? Or are these the ‘greatest songs´ with guitar just happening to appear on them? Or maybe - given Rolling Stone´s rather bizarre pick of Beatles jewels - is the song there just because ‘guitar´ is in the title?

The fact is, even Eric Clapton dislikes Cream´s Crossroads - he´s out of time and he knows it. “I've always had Crossroads held up as one of the great landmarks of guitar playing,” he reflected in 1998, “but most of that solo is on the wrong beat. Instead of playing on the two and four, I'm playing on the one and three and thinking, 'that's the off beat.' No wonder people think it's so good-because it's wrong!"

If Clapton is to be in the Top 3, surely some of his more pioneering work with John Mayall´s Bluesbreakers should figure? Or one of his later, more popular solo tracks? Is Brown Sugar even the strongest Rolling Stones guitar track on Sticky Fingers, let alone their best ever?