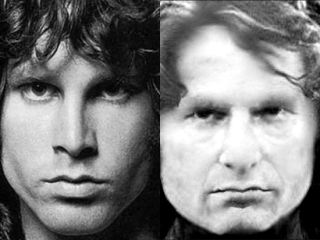 If The Doors' Jim Morrison hadn't died prematurely of a heart attack aged 27 in 1971, he'd be celebrating his 65th birthday today. With that in mind, the University Of St Andrews' Perception Lab have worked out what he would have looked like as a pensioner.

Starting with a photo of Morrison in his mid 20s, researchers used special 'ageing' software to reproduce the natural effects of growing old. Changes in 'skin texture, hairline and hair colour' were all taken into account to create this…

And there you have it. At 65-years-old Jim Morrison would look rather scary sporting a grumpy expression sat upon a horizontally stretched, slightly caved-in face. On the plus side and, ignoring the enlarged forehead, he'd have kept his trademark thick curly hair with only a hint of grey.

Alternatively, they could have just scanned in a recent photo of Val Kilmer, who looked the spit of Jim Morrison in the 1991 film The Doors.