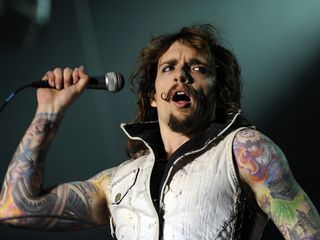 In an exclusive interview with Total Guitar The Darkness frontman Justin Hawkins has revealed more details about the band's forthcoming third album.

In part of the interview in TG issue 218, Hawkins reveals that the as-yet-untitled record - their first since a messy split back in 2006 - is almost complete.

"To use one analogy, the house is built," he says. "And it's a lovely house. How we decorate it is the next conundrum. We're getting to the stage where it's like, how much do we want to blow it?

The Lowestoft band also reveal a few themes and influences fans can expect to hear on the album: "There's a lot about small-town life. The album has songs about stuff that's happened to us in the town. It's AC/DC, Queen, Aerosmith, et cetera."

To read the full interview with guitarists Justin and Dan Hawkins pick up Total Guitar issue 218 (on sale in the UK from 5 August to 1 September).