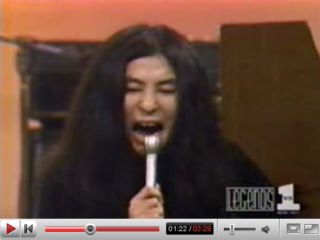 Every week MusicRadar trawls YouTube to bring you the greatest, funniest, weirdest and most interesting music clips and videos on the internet. This eighth installment of our weekly round-up contains everything from stunning slide guitar to classic drum machines and… Phil Collins.

1. Ben Harper tears it up on lap steel
That must be a go-faster headband he´s wearing.

2. Ridiculous solo guitar
This man has 10 strings on his guitar, no loops, no overdubs. Ridiculous and impressive at the same time

1. More iPhone music
Via Synthtopia, a relaxing number called Smoky Bubbles from the iPhone band. It was created using a variety of iPhone music applications.

2. Sly Stone´s drum machine
The Maestro Rhythm King MRK-2 was used on the funk master´s seminal There´s a Riot Goin´ On album. See it in action.

3. The studio process
American Producer/singer Ryan Leslie released a video that showed him ‘at work´, then Canadian producer/musician Gonzales delivered this parody. We know which we prefer…

4. The multi-talented music system
From 1985, an advert for the Amstrad hi-fi system that was also a 4-track recording studio. We´re not sure it was this that made Sir Alan Sugar his millions.

5. BeatBearing
Ever wanted to use ball bearings to program your drums? This ‘tangible sequencer´ enables you to live out your dreams.

1. Phil Collins drum duet with Chester Thompson
If Collins really is retiring, then there´ll be no more of this. Is that good or bad?

3. How drum sticks are made
They´re not just big twigs you know!

4. Steve Smith doesn´t need a drum kit
Just a set of hi-hats is enough to keep him and his audience amused.

5. Akira Jimbo plays James Bond
Well, Jimbo´s the right name if someone´s going to do it.

Still bored? You won´t be after you´ve experienced the awesome spectacle of Joe Pesci rapping. MusicRadar is speechless.