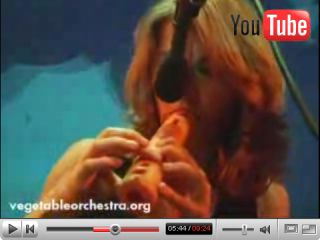 Have you ever seen someone playing a carrot?

Every week MusicRadar trawls YouTube to bring you the greatest, funniest, weirdest and most interesting music clips and videos on the internet. This week there´s everything from Keef and KFC to Garageband and Garibaldi.

2. Three songs from Leadbelly
Apparently the only video footage of the blues legend, filmed in 1945.

3. Allen Collins´ solo on Lynyrd Skynyrd´s Freebird
Yes, it's overplayed. Yes, it's a cliche. But damn, it rocks and is seven minutes long!

4. Tom Morello video lesson
The Rage Against The Machine legend demonstrates how he does all those crazy noises.

5. KFC fan Buckethead playing live
Buckethead takes time out during a gig to play some chicken-pickin´-good guitar. Then something really strange happens….

1. Usher´s GarageBand-based hit
The R&B superstar is the latest artist to have a hit with a song built around GarageBand loops. The question is: did he even know?

2. Blue Monday live in 1984
A studio-based performance of New Order´s finest moment. Bernard Sumner forgot to put his trousers on that day, presumably.

3. More on Kanye´s sampling
A quick guide to the sources of Mr West´s most recent album, Graduation

4. Keith Emerson on Letterman in 1986
Seriously, they put this on TV? Children could have been watching. Look out for an offensive amount of muso posturing from the entire band throughout.

5. Keytar calamity
Why is it that they don´t make keytars any more? Because of this lady right here.

1. New York street drummer
Inventive use of a bucket, sir. We´re trying to work out if this is actually speeded up…

3. Beatboxing and playing the flute at the same time
The inspector gadget theme tune has never sounded this good.

4. Buck Nelson: Lifting the Cloak Of Mystery Off Rock Drumming
By the end of this instructional video, Buck Nelson will have you rocking hard and slaying the competition.

5. A lesson in tight funk from David Garibaldi
The Tower of Power drummer playing live at the North Sea Jazz Festival.

Still bored?
We give you the Vienna Vegetable Orchestra.