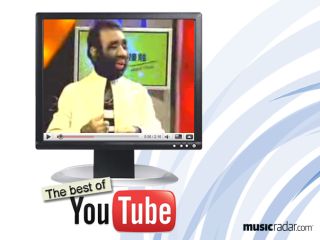 The world's second-hairiest man can sing!

This week: marvel at the wonder that is Jimmy Page on bass, stare in awe at a 54-year-old schoolboy ...and watch Pharrell Williams waiting for a McDonalds. Amazing!

Being famous is usually enough to get you anything you ever wanted… just not if you're in McDonalds in Paris and your name is Pharrell Williams. Even making up a McRap and doing a McDance around the empty forecourt isn't enough to persuade the bemused staff members to serve a Big Mac before the restaurant has even opened for breakfast. Yep, someone just called the police…. Tom Porter

The Yardbirds - Train Kept A Rollin' (Jimmy Page on bass)

Two years before he would turn the world on its ear with Led Zeppelin, Jimmy Page was a Yardbird, and here he is playing bass(!) on a particularly stomping version of Train Kept A Rollin' at an equally stomping outdoor show in France. The late Keith Relf shows all the harmonicats out there how it's done. Joe Bosso

Bonnie 'Prince' Billy: I Am Goodbye

Excellent new album Beware sees Will Oldham keep in touch with his more country tendencies, as last realised on Greatest Palace Music. I Am Goodbye is the first promo video for the album and, whilst not as sublime as this, is a sweet representation of an artist at the peak of his considerable powers. I love him. So should you. Mike Goldsmith

Future Of The Left - The Hope That House Built

From the ashes of McLusky and Jarcrew came noisy and fiercely intelligent Cardiff trio Future Of The Left. Album number two is imminent, and The Hope That House Built is the lead single. Frankly, it makes us want to wear a hat that looks like a beard. Check out the band's official website to hear more. Chris Vinnicombe

The world's oldest schoolboy is 54