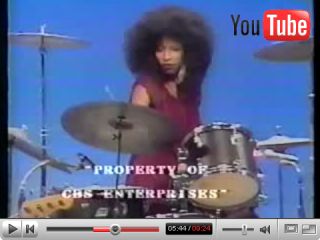 Every week MusicRadar trawls YouTube to bring you the greatest, funniest, weirdest and most interesting music clips and videos on the internet. The fifth installment of our weekly round-up contains everything from SynthAxe to a super funky rendition of Stevie Wonder's Superstition.

1.SynthAxe fun
Allan Holdsworth plays the SynthAxe
Remember the SynthAxe? Don't worry, MusicRadar barely does. From the That's Just Wrong Department, we feature a great guitarist playing something that looks like a piece of dentist's equipment.
Victor Wooten bass solo with SynthAxe Drumitar accompaniment
Victor and his brother ‘Futureman´ Roy Wooten go crazy at a Béla Fleck And The Flecktones gig. Watch to the end and you´ll see what we mean.

2. Dude plays giant Flying V guitar in Times Square
Does what it says on the tin!

3. Buckethead on the banjo
Is this a frightening hint at Guns N´ Roses´ new direction?

4. Loop pedals in different genres
Steve Vai live in Denver with a loop pedal
Those of you with keen eyes will also notice Steve is playing a three-necked guitar.
KT Tunstall demonstrates the use of a looper pedal
The Scottish songwriter is famous for her use of loop pedals live; she cooks up a version of Missy Elliot´s Get Ur Freak On here.

1. Giorgio Moroder at work
Archive footage of the legendary producer going through his box of tricks in “a recording studio that even NASA can´t match”.

3. Hating on Kanye West
How easy was it to for him to sample a Daft Punk record for his hit single Stronger? This easy.

4. Stevie on the Clavinet
MusicRadar favourite Stevie Wonder grooves through an obscenely funky Superstition - possibly better than the album version - in 1973.

5. Stylophone star
Ever wanted to hear a medley of ‘80s hits played on a Stylophone? If so, your ship just came in…

1. Terry Bozzio vs Chad Wackerman
It's a tie, they're both awesome. More important, consider the poor roadies. Can you imagine having to tune these set-ups?

2. Human beatbox vs drums
There´s only one winner here.

3. Chaka Khan playing the drums
We even didn´t know she could play the drums!