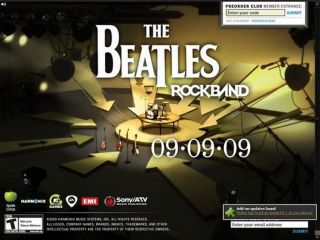 The stage, the instruments...where's the band?

Music fans and gamers can expect a hard day's fight in September, as two video game titans are rolling out their big guns.

In one corner, we have The Beatles: Rock Band, which just today added new images to the website's landing page.

As you can see below, Ringo Starr's drum set now sits atop the riser. Additionally, the stage features instruments made famous by John Lennon, Paul McCartney and George Harrison.

The tracklisting for The Beatles: Rock Band is still a well-kept secret. Perhaps we'll know after the E3 Electronic Entertainment Expo set for June 2-4. Keep it locked on MusicRadar for more news.

But the folks at Activision aren't falling for the Fab Four so easily. In the other corner, we have Guitar Hero 5, due 1 September (eight days before the release of The Beatles: Rock Band). Ballsy, huh? You bet.

While details of new instrument features are still under wraps, Activision has released a listing of artists who will be featured on the new set. They include:

There's still four months to go before both games see the light of day, and more details to follow. We'll report, you decide.