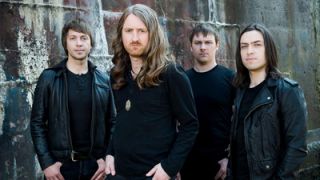 "If you're being that disciplined, it requires a lot of straight-talking about what gets cut."

Northern Ireland's classic rockers The Answer spent six years grafting before a two year stint supporting AC/DC on the rock juggernauts' Black Ice tour in 2008/2009 thrust them into the limelight.

Where did you record the album?

Paul: "It was Vale Studios in Worcester. It wasn't massive, but it had a good live room. There was a nice Neve desk and it was all very minimal on the outboard gear, which was part of the charm. There were limitations, but working around them added to the record."

Cormac: "It was like a renovated country manor, so it had a lot of charm. It was in the middle of this tiny village called Fladbury and the only services it had were two pubs and a pie shop. It was all we needed! Everybody would meet in the pub at night and drink the local ales and clear their head for the next day in the studio."

What's your overriding memory of the sessions?

Cormac: "It was Toby's [Jepson, producer] way of doing things. I was let off the hook largely, but the guys must have played each song 25 times… There would kind of be a sweet spot round about the middle of those 25 takes where you'd usually get 'the' take."

So you recorded live with the full band for full takes each time?

Paul: "Yeah, it was tough! And solos were done within that, so you couldn't overdub it. I think Toby wanted us to keep doing it so that we would kind of almost forget about it - and he was right! About 15/16 in, you would forget about it and do the perfect take."

Paul, what do you think had the biggest influence on you when writing your guitar parts?

Paul: "I think it was probably just removing the safety net of overdubbing the solos that was the biggest influence. [Perhaps] an album like Van Halen I - stylistically, it's not in the same bracket - but like Ain't Talkin' 'Bout Love, the solo on that, where it's more part-based rather than shredding solos, that kind of mentality was used. But whatever went down was what stayed on the album - I couldn't go back and re-do it, so that was the determining factor."

As the only guitarist in the band, how has your approach to the task changed since your debut album?

Paul: "On this one, it was about trying to get all the parts in one performance… [Then] I suppose it's just learning to not being afraid. You're very conscious of when you stop playing and the space that leaves, but it's sometimes a good thing. So I've definitely become a better listener to what James [Heatley, drums] and Mickey [Waters, bass] do and I have more trust in them to fill up the space."

What's the secret to making a single guitarist work on the record? Is there more to it than just layering?

Paul: "It's mostly just that we recorded the guitar in stereo with a Vox AC30 on one side and Marshall JCM800 on the other. The AC30 gives you a lot of clarity and it sounds great when you really dig in on a single string riff. Then it's hard to go wrong with an '800.

"The combination of those two amps is the sound of the record. There are some overdubs with rhythms, just to fatten it up, with a Marshall Super Lead, but our thinking on that was that it's not like another guitar player coming in, it's more like going to the chorus and hitting a distortion pedal."

What were your main guitars on the album?

Paul: "There was a guitar shoot-out in the beginning. I had a couple of Les Pauls - a late 90s Les Paul Classic, a 2008 Standard, then a '78 Custom - a Firebird and a Flying V. We did a shoot-out with all of those, but the guitar that came to the fore was this brand new Zemaitis, which I wasn't expecting at all.

"It was almost a Tele/Les Paul hybrid. It had PAFs in it and just had the right twang without being 'too Tele' and it still had the body of a Les Paul, without being too muddy. I had to dig in a bit more and I think that added to the tone."

For a classic rock-based band, you've always had short, punchy tracks. Is that something you've done on purpose? Is this your shortest album yet?

Cormac: "I think it is [the shortest album we've done]. It was part of that mission statement we set ourselves of recording a 10-track album of songs that would knock your socks off. It was the first time we've sat down and had a discussion about the kind of album we wanted to make.

"We were like, 'Listen, we're going into the studio in three months. What the f**k kind of album do we want to make here?' It was refreshing to actually bring that kind of focus to the table."

If you're being that disciplined, it requires a lot of straight-talking about what gets cut. Was there any 'friendly' debate on that front?

Cormac: "Does it count as 'friendly' when you've got Mickey by the throat!?"

Paul: "He gets quite emotional... It's always hard to let go of songs that you believe in, but it had to be focussed, we all signed up to that. There were a few debates, but for the most part we got it right."

You're off on tour again in October and you've undertaken some huge tours in the past. Do you still have the thirst to get out there?

Cormac: "Oh yeah. We can't wait to get going and it's going to be such a great tour. We've got Tracer supporting - another great band - and whenever you're on a tour of that size and you've got a strong support, it enhances the tour so much. After a couple of days you get a momentum going that just carries you right through. Then all of a sudden, you're sitting back in Belfast going, 'What the f**k just happened!?'"