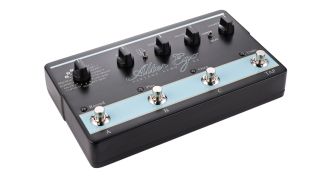 The upgrade to the Alter Ego Delay features a selection of vintage-style sounds, including tones based on the Roland Space Echo, the Binson Echorec and the Echoplex.The Alter Ego X4 Vintage Echo is also capable of utilising TC Electronic's TonePrint technology, opening up a further range of delay sounds for players in search of something different.

Aiming to credibly cover off lo-fi, hi-fi, tape, analog and digital delays, this is an awful lot of varied delays and echos in a single box, and pretty much a must-try for experimental types looking for a versatile delay unit.

Risskov, Denmark, June 16th 2014 - TC Electronic and ProGuitarShop team up once again to build upon their former smash hit, the Alter Ego Delay, which with its two exclusive vintage echo sounds made every delay-loving guitarist out there solo their socks off. Now TC Electronic's and ProGuitarShops's unrivaled love for delay has resulted in no less than 12 exclusive delay tones that all hark back to the beautifully lush and saturated delays of yesteryear.

On top of this you get all the modern features of TC Electronic's original Flashback X4 Delay, which include 4 TonePrint slots, 3 programmable presets, a 30 second looper, stereo in/out, MIDI programmability and you can even hook up an expression pedal in order to control any delay paramater via your foot.

So with the new Alter Ego X4 Vintage Echo you get all of the vintage sounds you could possibly desire, with all the modern features required by today's musicians.