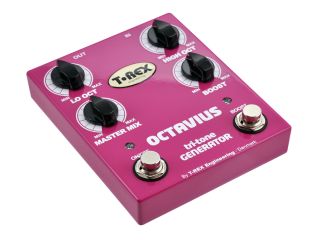 PRESS RELEASE: New from T-Rex: The octave effect has been a staple of effects boards ever since Hendrix himself brought it to public attention on tracks like 'Machine Gun' in the '60s and early '70s. Now T-Rex have created Octavius to give you all you would expect from an Octaver and more.

Four simple controls provide manipulation for Hi Octave level, Lo Octave level, overall level of the two and an ingenious Boost level. Tracking of the signal is superbly accurate, and adjusting the levels between the two signals provides a huge array of sounds from bass simulation to ear shredding treble.

The Octavius has two switches, one for effect on/off and one for Boost. Set the effect level then switch in or out, and step up the level again with the Boost for solos. Boost can even be used when the octave is not switched in, adding an extra level of functionality to the pedal.

Superb T-Rex build quality is evident though out, and the pedal is compact while still remaining clearly laid out, and the vibrant pink finish means it will not be lost on any effects board! Couple this with stunning sound quality and Octavius is surely another future classic from T-Rex.

Octavius is available now from your nearest T-Rex Dealer SSP £215.