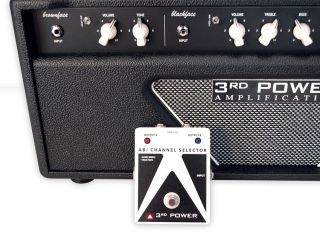 Bright red and blue LEDs display the selected status of the audio signal flow. Primarily designed as a means of channel switching its Dream Series amplifiers, the unit functions equally well when deployed as a switching device to select between two different effects setups, amplifiers or switch between an amp and tuner.

The AB Channel Selector's handwired point-to-point circuitry delivers a direct signal flow to the selected output. Meanwhile, the unused signal path is shorted to ground to eliminate excess noise from the connected yet inactive device.

The LEDs are powered by an onboard 9V battery and alternatively via an external power source when connected to a standard 9V DC power supply. Audio connections to the AB Channel Selector are made via standard quarter-inch phono jacks. The unit bears the unique styling of 3rd Power's Dream Series amplifiers.

"Artists have expressed the desire to deploy our Dream Series amplifiers with channel switching functionality," notes 3rd Power founder and designer Jamie Scott. "We developed the AB Channel Selector specifically to unlock this functionality while staying true to the handwired direct signal path of these amps without the use of any IC chips, relays or other electronic switches."