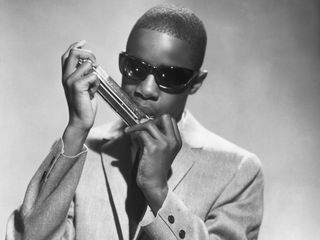 Portrait of the artist as a young man: Stevie Wonder in the early 1960s (Image credit: Bettmann/CORBIS)

To celebrate Wonder's birthday, let's look back at just a few of his stunning achievements. To say most are groundbreaking is akin to pointing out that water is wet.

In 1961, Ronnie White of The Miracles brought the then 11-year-old Wonder (he had already changed his name and was an accomplished multi-instrumentalist) to the attention of Motown Records CEO Berry Gordy. Gordy promptly signed Wonder to Motown's Tamla label, billing him as 'The Eighth Wonder Of The World.' Two releases failed to chart, but in 1963 Little Stevie Wonder had his first smash with Fingertips (Pt 2).

Dropping the 'Little' from his moniker, Wonder scored an across-the-board hit with Uptight (Everything's Alright) in 1965, which he co-wrote with Slyvia Moy and Henry Cosby. In 1995, Oasis recorded a song called Step Out, written and sung by Noel Gallagher. But the track sounded much-too-close to Wonder's hit. Step Out was left off the album (What's The Story) Morning Glory? but was eventually issued as a B-side with the writing credits 'Gallagher/Wonder/Cosby/Moy.'

And hey, let's not forget what a supremely talented musician Wonder is. Check him out on the drums. Better than a lot of sighted players, wouldn't you say?

In 1970, Wonder won his first Grammy nomination for the first song he produced himself: Signed, Sealed, Delivered. But it also marked a turning point for the artist, as he made it clear to Berry Gordy that he wanted greater control over his music.

In 1972, after almost leaving Motown, Wonder released what is now regarded as his first album masterpiece, Music Of My Mind. He played nearly all the instruments and began to experiment with synthesizers. That same year, he issued Talking Book, which included the number one hit Superstition, a song originally intended for guitarist Jeff Beck. (Special note: it does not get any funkier than this!)

The '70s were a golden period for Stevie Wonder. Writer, singer, instrumentalist, producer, he released a string of classic albums such as Innervisions, Fulfillingness' First Finale and Songs In The Key Of Life. Increasingly, his music reflected his views on both social and spiritual issues.

During the 1980s, Wonder was atop the charts again with the album Hotter Than July, which featured his ode to Bob Marley, Master Blaster (Jammin').

Later that decade, Wonder collaborated with Paul McCartney for the some-love-it-others-can't stand it smash Ebony And Ivory. A few years later, he took part in the historic We Are The World recording.

During the '90s, Wonder's musical output slowed a bit but not by much. He recorded the soundtrack for director Spike Lee's film Jungle Fever, played harmonica on Lenny Kravitz's version of Deuce for a KISS tribute album and teamed with Babyface for the song How Come, How Long which concerned domestic violence.

During the past decade, Wonder released the well-received album A Time To Love, returned to live performances for the first time in 10 years, and took part (with myriad guest stars) in this spirited take on one of his best-loved gems for President Barack Obama.

Happy Birthday, Stevie. We at MusicRadar wish you many, many more. Thanks for the music!