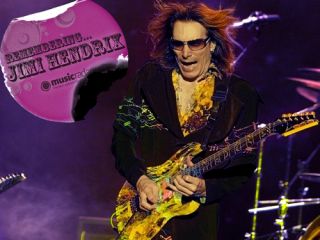 "I grew up in a house where my parents were listening to show tunes, and as a kid I liked listening to that kind of thing, too - whatever music was playing, I enjoyed it. But my sister was into all of the great rock music from the late '60 and early '70s, and I started sneaking into her room and listening to it on the headphones. She had the eight-track tape of Woodstock, and one day I went in and put that on… and it was the first time I heard Jimi Hendrix.

"It was like electric sugar, to borrow a phrase from Tom Waits. I was 12 years old or so, and I would lie there with the headphones on and listen to Jimi playing The Star Spangled Banner and Purple Haze over and over and over. I didn't know what he looked like; I didn't know a thing about him. I just knew that whatever he was doing, however he was making these sounds, it was incredible. I got so excited and I thought, Whenever this guy comes to town to play, I've got to see him. I had no idea that he had died.

"Eventually, I got a copy of Are You Experienced, which was an epiphany for me. The songs were accessible, they were beautiful, and there was something about Jimi that was ultra cool. Cool is something that has to come from deep within you. It's a confidence that you have. Jimi had enough confidence and cool for five people.

"When you're 12, as I was, and you're seeing something like this for the first time, the impact is indelible. You're not aware exactly of how things used to be; you don't have that frame of reference. To you, you're seeing how things are. Seeing Jimi, who was a lefty, and he had this magnetic expression on his face and this impossibly cool fashion sense... I was drawn right in.

"Plus, there's the guitar playing. I hadn't picked up the instrument yet, so I didn't know how ridiculously hard it was to do the things he was doing, but something did tell me that he was brutally innovative on the guitar. Mind you, he was pretty much my starting point, so it took me a while to realize how many boundaries he had broken. I just knew that every song, every passage, every sound he was making, it was like a big trip into the unknown, and I was more than happy to go for the ride.

"It was really eye-opening when I started taking guitar lessons from Joe Satriani, who had a stack of Jimi Hendrix records. In fact, Joe was the first person to tell me that Jimi had died. I was so disappointed, because I thought, I'll never get to see him play.

"Watching Joe play Jimi's songs on the guitar was an unbelievable experience. It was the first time I actually saw somebody play this amazing music right in front of me. Up till then, it was all alien to me; it existed on records and eight-track tapes. Watching Joe perform Hendrix on the guitar made me realize, 'I can do this, too.' And of course, Joe showed me all the chords and the voicings and how things were done. It was such a magical time.

"Something I loved about Jimi was how many dimensions he had to music. A lot of guys play just blues or just rock or just… whatever. Jimi took it all and made it something that was uniquely his own. Blues, rock, jazz, the psychedelic stuff, even folk music like Dylan - nothing got past him. That made a big impression on me, that you could play anything and mix up all the colors if you did it with heart and fire and energy. Jimi was always pushing for something greater, something deeper.

"I'll be honest: Jimi didn't get me to pick up the guitar. The defining moment for me to start playing was when I heard Led Zeppelin's Heartbreaker. But Hendrix was certainly a huge influence, one of the biggest, so much so that I was always a little nervous when I found myself playing a bit too much like Jimi - or Jimmy Page or any of my other heroes. Because, with rare exception, I never think that you can do it better than the original. In fact, I was a little upset the first time I heard Stevie Ray Vaughan, because I thought he was copping Jimi too much. It wasn't until later, when I heard everything else Stevie was doing, that I realized he had his own thing happening and he was a great musician.

"Through the years, my influences became pretty diverse. If you listen to my body of work, it runs the gamut. But Jimi is definitely in there. In fact, when I'm just sitting around the house and I pick up the guitar, I'll find myself playing something a little bluesy, and before you know it, you'll start to hear a little Jimi. And as I get older, I'm not so hung up on playing too much like him, because I think I've forged my own style enough that I'm not copying or ripping off what he did.

"This is important, however, because that's something Jimi instilled in me: He helped give me the confidence to do what I wanted to do. He marched to his own beat. How many people, whether they're artists or businessmen, have that kind of courage? Not many.

"People ask me all the time if somebody can come along, in this day and age, and have the same kind of impact that Hendrix did. And I say, 'absolutely.' It wouldn't be just like Jimi Hendrix. It shouldn't; it can't. That's like saying a group can be just like The Beatles and revolutionize music. No, they were The Beatles, and they changed music the way they did it.

"Look at Edward Van Halen: He came along and revolutionized the electric guitar, but he did it like Eddie Van Halen, not like Jimi Hendrix. You have to quantify these things. But I would like to think that it can still be done. It will be.

"I see this in guitar players all the time. They want to have an impact, but they pantomime their heroes. That's not how it's done. Innovation is about having an inner vision. That's what Jimi had. Sure, he loved Buddy Guy and Muddy Waters and lots of other players, but when it came time to developing his own style, he looked into his mind's eye and said, 'What do I want to be?' That's so crucial to art. Be what you want to be. Jimi did. So can you.

"This is going to be interesting taking part in the Experience Hendrix tour that's coming up. Any great musician creates an aura and a mystique that goes along with the music, and Jimi's music has a soul that is beyond special. I want to pay tribute to that soul and mystique, but like I said, I don't want to go up there and just pantomime. Playing Jimi's music note for note… first off, I couldn't do that without spending an inordinate amount of time on it, and secondly, that would defeat the entire purpose of the event.

"This isn't a Jimi Hendrix tribute band where guys dress up like Jimi and play the white Strat and all that; this is a celebration of Jimi and his music, and the best way to do that is to remain true to yourself while you perform his songs. That's what Joe did on the last tour, and he told me he had a blast.

"It's all about artistic freedom. Jimi Hendrix really lived that, and whenever I hear his records, I still get those same goosebumps, that special kind of feeling that anything is possible. Hopefully, people coming to the Experience Hendrix tour will feel that. I think they will. Your music can't live and inspire so many millions of people all these years if you're not making them feel something."

Steve Vai is a three-time Grammy Award winner, guitarist, songwriter, vocalist and producer. He will be taking part in the Fall 2010 Experience Hendrix tour.