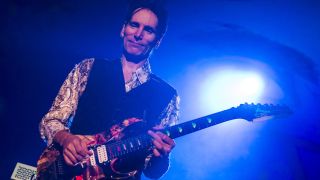 It's probably fair to say that Steve Vai knows what he's talking about when it comes to touring. Having famously cut his teeth with the some of rock's more excessive types - among them Frank Zappa and David Lee Roth - he's spent a large chunk of the last 30 years traversing the globe, playing mind-warping music and wowing crowds. And according to the reviews, he's gotten pretty good at it. Currently cutting a swathe through Europe before he heads to the UK this December, we caught up with the guitar supremo to get his thoughts on 'tour assholes', Yngwie Malmsteen and cycling. As you do...

What's been your favourite tour that you've taken part in to date?

"Every tour I've done has had stand out moments. Some were really challenging, but the Eat 'Em And Smile tour with Dave Lee Roth was really quite fantastic. I was a rock star overnight and touring the way they toured and that whole experience really opened my eyes. But then again the Real Illusions tour I did with Billy Sheehan and Tony McAlpine - that was real fun. And then my last tour with the String Theories band had some great elements to it, too."

What makes a 'good tour' a good tour?

"The thing that creates the dynamic of the tour is usually the frame of mind of the tour-leader. You're living with a group of people for a long time - and there's no secrets at sea! People's personalities are really exaggerated. If there's someone that seems like a jerk, when you go on tour with them, they become a really big asshole! But if you go on tour with people that are considerate, fun and interesting, they become really fun. A tour is a piece of your life, so it doesn't matter how many tickets or records you're selling, one asshole can fuck up the entire memory!"

What are the tour memories that have stayed with you?

"There are the classic answers, such as, 'When I was on tour with Dave Roth, we had strippers dancing on our dinner table every night and we'd rent an entire floor of the hotel and it would just be one chaotic party all night.' And that was all interesting and fun to a degree, but that was that period of my life... Now it's about doing the simple things like exploring a city. I get on my bicycle everyday and ride around these interesting exotic countries and just see how people are living."

So it's the bonds formed with other people that you treasure most?

"Absolutely. That's what I loved about the G3 tours. I knew all about John Petrucci, but until I worked with him I didn't know what kind of a guy he was and we created a very, very strong bond. He's really a beautiful, beautiful guy. The same thing with Steve Luke [Lukather]. Even Yngwie [Malmsteen]. I've known Yngwie for 20 years and then when I toured with him, I got really close to him. To know Yngwie is to really love him - to not know him is to think he's an asshole!"

Would you ever consider a tour where you return to playing the sideman for another band?

"I really enjoyed doing that when I did it, with bands like Whitesnake and Dave Roth and Frank Zappa, but at this point in my life, I really don't have any desire to do that. I don't have that hankering to put a supergroup together. I wouldn't be opposed to getting together with some interesting people, whether they're superstars or not, and creating something that's different and accessible, but it would have to be on my - or the band's - terms. I get people calling and saying, 'Hey, if we put this band together with these guys and we do a real rock record...' I'm like, 'You know what? That's not going to work for me.' I know what that means. It means playing music like a lot of other people and that's just not on my cards these days."

You're heading to the UK in December. Do you have a favourite venue to play here?

"I like the Apollo in Manchester. On one of my [earlier] solo tours my goal was to be able to sell-out a good-sized theatre. I was kicking off the tour there and I sold it out - it was just such a high, feeling like, 'Wow, it's really amazing all of these people came...' Every venue has a different story to it and a different romance. All stages sound different. A lot of it's based on what the material on the floor is, what's on the walls, what the seats are made out of - it all has something to do with the overall feel of the stage. Like Wolverhampton Civic Centre is very wooden, so it's very reverberant, whereas the Royal Albert Hall sounds like you're in somebody's living room with a very clean amp."

You released your new Carvin VL300 Legacy 3 signature amp earlier this year. Is that your only live amp now?

"I use that and my Legacy 1 live, but that's it. With the Legacy 3, we wanted to pack a wallop in a smaller head - so it has all of the same qualities of a large-sized head, but in a smaller package. It also has this Master Volume gain stage that is just indispensable for me. The master volume on most amps is before the pre-amp and it has a tendency to change your saturation level when you bring it down, but with the Legacy, the master volume is after that, so when you move the volume around it doesn't change the saturation level of your tone."

What do you look for in your touring rack/effects rig?

"I look for something that has transparent sound, that won't conflict with the sound of my amp. Something with ease of use and flexibility. There's a lot of gear out there and sometime's it's a bit of a jungle, but every once in a while something exceptional pops up. I use the Fractal Axe-FX II and that's quite a powerful tool. I use it for my effects, in the effects loop of the amp head, so my choruses, delays etc, go through the Fractal."

How do you choose which of your 260+ guitars to take on the road?

"My main guitar is EVO [Steve's legendary Ibanez JEM7VWH], which I've been using for well over 20 years and that's still used for a lot of songs. Then I have FLO, which has a Fernandes Sustainer pickup on it. Then we do a couple of songs that use seven-strings or acoustics and a couple of songs that are tuned down - like Gravity Storm and John The Revelator. Then I have to bring a back-up of every guitar, so it's probably close to 14/15 guitars in total. I always bring one guitar that's out of left-field, too. This year I've got the Ultra Zone guitar. I come out with this suit on that's got all of these LEDs in it and I play this guitar. It's really fun, but it's hard to play because I've got gloves on that shoot lazers out of my fingers!"

Steve Vai is touring the UK in December - you can purchase tickets from Ticketmaster. And don't forget to enter our competition to win a pair of tickets and a chance to meet and greet the man himself.