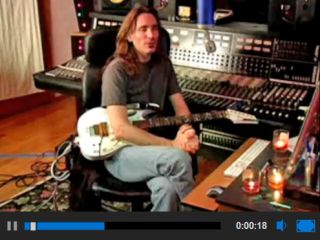 Vai, no doubt entering that "exclusive, elusive mental real estate" of his own personal muse

Fans of all things Steve Vai will be salivating at the prospect of a new series entitled Naked Tracks that contains mixes of Vai classics without the lead guitar parts.

The five volume series contains a selection of play-along backing tracks from Passion and Warfare, Sex & Religion, Alien Love Secrets, Fire Garden, The Ultra Zone, Alive In An Ultra World and Real Illusions: Reflections amongst others.

Vai explains: "Through the years, whenever I would mix my records I would usually do a mix of specific songs without the lead guitar. This allowed me to play along with the track or make loops to jam to, and because I figured perhaps someday maybe others would like to do the same. Voila! We have arrived at someday.

"Playing to these naked tracks, or creating loops of various sections, to endlessly meander over, is a phenomenal way to discover unique musical ideas from within yourself.

"When we are playing an instrument and our mind enters that exclusive, elusive mental real estate of our own personal muse, it can result in a form of musical meditation. This series of play-along CDs is designed to help create an atmosphere of focus so you can shred yourself into a personally-induced inspirational nirvana."

Right. Thanks Steve. The tracks in the series are largely presented in their original form with the lead guitar removed, but in some cases there are looped solo sections that can be easily dropped into a DAW to jam over.

The Naked Tracks series will be a five-disc set, with individual tracks available for download through various digital download stores. Keep an eye on Vai.com for more updates.