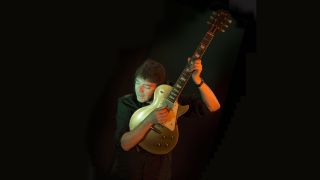 "The act of love can't afford to be too simulated, there's got to be a wildness about it."

For some poor fools, prog has been a dirty word for decades. But it's back, and bigger than ever.

Don't believe us? Just look at Steve Hackett. The former Genesis guitarist last year released his album Genesis Revisited II, for which (as the name suggests) he trawled through the back catalogue of his old band and re-recorded a few gems. The record earned rave reviews and spawned a sold-out tour.

Now Steve is back with a DVD and CD release of the show, and has just announced yet another fresh batch of UK tour dates for 2014.

Last year you released Genesis Revisited II. Since then you've had a sold-out tour and now have a DVD/CD of the show and another batch of tour dates on the way. That's pretty impressive...

"It's been amazing. It's a mad life. I'm off to the States tomorrow and have an action-packed day today. I don't have time to pack! The response to everything has been fabulous. It's great that there are still people there who want to hear [the music], and new people that weren't even born when it first came out."

Is that a barometer of the material's strength?

"I think so. I think that's why it's lasted. The music is the star of the show, whoever is presenting it."

"I think there has been a resurgence in instrumental rock, which includes prog. People want to play music as the antithesis of programming. It's very weird - one minute it's out of fashion like thatch-roofed cottages and the next it's in again.

"It's a bit like vinyl. People say things sound much better on vinyl. But the reason we superseded vinyl was the desire to have silence without clicks and pops. Yes, it's great when the music is driving with extra compression and distortion, but I used to hate to write quiet bits because they would never work. Things go in and out of fashion, just like me."

Genesis Revisited I came in 1996 and Part II followed 16 years later. Why was this the right time to go back to the old tunes?

"It was the desire to play the stuff live. The best place to start is an album, so everyone knows exactly what to play because they've crafted it before. It also gives me the chance to fix everything I didn't get right the first time.

"Not just the tuning, but the tone of the guitar and the way I play now. Lots of things were good then, but lots make me wince. I can hear the struggles. It was all small amps vs big amps, how they were miked. I bypass that now and go straight into a computer. We can change speaker cabs at the press of a button. The simulation of those things is so good.

"I sacrifice spontaneity for focus now. We did it the time-honoured way back in the day, but now I can look at it like a test tube baby and fix it. Wouldn't it be lovely if it came out with beautiful ears this time?

"Nothing is sacred. I can add an orchestra in places where we might have had keyboards before. Sometimes I want a fuzz box instead of a tube amp. I still use mechanical devices and pedals and I use a Fernandes Sustainer guitar - the Les Paul only comes out occasionally. For this I wanted great sustain without the tyranny of volume being an issue, and these Japanese guitars allow me to do that."

How about the live rig? Do you go back to tube amps on the road?

"It changes then because I use Marshall amps. I'm even wearing a Marshall T-shirt. I'm such a trainspotter that I've got a Marshall bag for my bottleneck and plectrums. I'm a Marshall fetishist. I used to think anybody who owned a Les Paul and a Marshall had already made it; they had the paint and the paint brush."

Has finding your rig been an evolution?

"I think so. Certainly distortion units enable you to do stuff where you'd have had to turn up very loud before. With tube amps you have to drive them pretty hard, and it can be unpleasant to explain what you're doing while deafening people.

"I'm using monitors in the traditional way. Everyone else is using in-ear monitors, but I want to hear the hall. I don't want to just hear myself very clearly in miniature. The act of love can't afford to be too simulated - there's got to be a wildness about it for me."

How did you go about picking songs for the live set?

Does this being your project, without having input and opinions from the rest of Genesis, make it an easy show to put together?

"I think it does. I suspect there would a conflict between 1980s philosophy and the 1970s. The 1980s was very much orientated towards hit singles. I suspect people were no longer making albums in the '80s - they were making a collection of potential hit singles.

"That applied to most bands, including Genesis. I'm not saying it's good or bad, but there was a difference when you were creating songs which you were visualising to play live, as opposed to designing something for a screen and a video. We did songs varying from one minute 30 seconds up to 23 minutes, and neither was ideal single length."

Have you had any feedback from the rest of the band about Genesis Revisited?

"No. I knew they would stay notoriously tight lipped because it is a very competitive band. I suppose I'm doing things where I thought the music was at its best. If you take the philosophy that you're going to do all the hits then don't call me up. We managed to sell millions of albums without having hits. We had one hit single while I was with the band, which was I Know What I Like. That was an idea I had that was rejected by the band. We revived it the following year and it became our first hit."

Is it difficult to capture the feel of a live show on CD/DVD?

"We mixed in 5.1 and I tried to squeeze in as many wide shots [as possible] so you get a sense of the scale of the show. Once you see the LED screens it is the equivalent of the moment the people waited for with Pink Floyd, where the plane flew into the back of the stage. We have a string of those moments with superb images. I wanted to throw everything at it. The cheque books were filled with the idea of going for broke on this and making an unforgettable show."

And is that what people can expect from the dates later this year - going for broke?

"Yes - that's what they can expect from the tour, the DVD and the album. I'm very proud of it all and proud of the team that put it together. It was outrageous to think we could go back and put it together with new visuals. It is different from a tribute band. It would be different to see Beethoven conduct Beethoven. I'm not saying I'm Beethoven, but if we could dig him up I think you'd like to see how he went at it rather than Simon Rattle."

What are you working on beyond Revisited?

"I'm recording new material now. I don't worry about, 'You can take the man out of Genesis but you can't take Genesis out of the man'. If you love music and have honesty and energy and not too much professional constraint…if you're worrying about the demographic you will never move on.

"We're in a post-video world and a lot of people are still applying video orientations to songs. That is a great mistake - invest it in your live show. Radio isn't going to play you once you're over a certain age, so once you're over 19 it's kind of forget it. So to men in their 60s I would say do what the hell you like."

Steve Hackett has just announced the Genesis Extended tour for October 2014, which go on sale this Friday 15 November at 9am from 24hr Ticket Hotline on 0844 3380000 or Bookings Direct.

For more details, including information on exclusive VIP packages to meet Hackett before the shows, visit the Steve Hackett website.