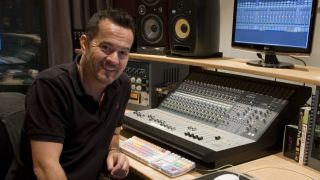 "Back then the only people who went to college for music were being classically trained."

Producer Stephen Street, whose credits include the likes of Blur and The Smiths, is to host a masterclass at BIMM Brighton tomorrow, Friday 21 February.

We caught up with Stephen ahead of the sessions to find out what he'll be chatting to the students at BIMM about, and what the challenges are for producers in the digital age...

What will you be talking about during the masterclass?

"I don´t like to think of it as a masterclass to be honest - I don´t intent to go in there and prophesise! I´m hoping more it´ll turn into an open question and answer. I like to be led by the questions I get from the students and see how it unfolds. It´s like when you´ve planned a really good night out, it´s never quite as good as the nights out where you don´t really plan it! That´s the way I´m hoping it will be.

"I´m going to tell a few stories about how I started on my own personal trip along this career I´ve had. I´m looking forward to it, it´s a great compliment to be asked to contribute to something like this, so I´m more than happy to be involved."

How did you get your start in the studio?

"Back in the ‘70s when I was a teenager, I was trying to be a musician first of all. There weren´t really any colleges as far as I knew, back then the only people who went to college for music were being classically trained. This thing recently of having engineering colleges where people can go along and learn how to be a sound engineer, it didn´t really happen.

"Back then, there were a lot more studios around, and they were always taking on staff to train up and become house engineers, which is exactly how I started. I started my engineer career working for Island Records in their studio basement, the Fallout Shelter. Back in those days you had Townhouse Studios, Air Studios, all these great studios set up across London that were taking people on and training them. Unfortunately, that´s not so much the case now with studio budgets being so badly squeezed. They´re not able to take on so many staff any more, they tend to be freelance a lot of the time."

Where are you primarily based nowadays?

"I´m based at Miloco Studios in Bermondsey. Miloco manage quite a few studios across the capital and elsewhere. Unfortunately a lot of good studios I´ve used over the years have closed now. Townhouse Studios is gone, Olympic Studios is gone, Maison Rouge where I recorded a lot of the Blur records is gone. It´s a shame, but it´s part and parcel of what happens when the recording side of the industry has been hung out the dry. With the downloading thing that´s happened in recent years, it´s the people who make those records in the first place, that attract the people that want to see bands at festivals and gigs, that have been squeezed."

Are you finding that you're getting less time to craft records with artists?

"Absolutely, yeah. When I think of the albums I did with Blur, we were given 10, 12 weeks to make the album depending on how many tracks we were working on. Blur were very creative and we often recorded a lot more songs than actually made it on the record. Nowadays, I´m having to turn around records much quicker than that. With technology, there are ways to speed up the process a bit.

"At the same time, sometimes one needs to try out different ways of recording something. Less money can be spent on the record, so that means cutting down on the staff involved, the time involved and indeed the studio involved. But hopefully we´ll get through this thing and things will pick up. Hopefully the piracy thing will be sorted out and people will start to see some return on their recorded output."

For more information check out the official BIMM website.