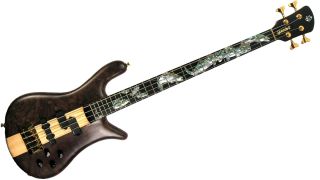 If you're crafting a bass dedicated to a fish, there's really only one homographical choice, but master luthier Stuart Spector has defied convention by dedicating his latest instrument to the 'King of Freshwater Fish', the Atlantic salmon.

One look at the fretboard confirms the theme, where mother-of-pearl and paua abalone fretboard inlays depict a school of salmon and a lone angler casting to the fish.

Spector's creation has been built to raise money for Atlantic salmon conservation in the United States and Canada, and is up for auction until 9 November.

If you're angling to practise a scale or two on this beast, you can place a bid over at the Atlantic Salmon Federation.