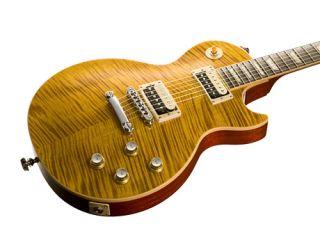 2010 is shaping up to be quite a year for Slash. Rock's most famous top hat fan launched the Gibson Appetite for Destruction Les Paul at NAMM 2010 in January and now the production version - based on the Kris Derrig '59 Les Paul Standard replica that he played on the Guns N' Roses debut LP - is about to hit the streets.

Also, this week saw more updates on the development of the Marshall AFD100 Appetite For Destruction amp, which will surely prove to be another compulsory purchase for anyone chasing that classic GN'R guitar sound.

Not content with nearly bringing MusicRadar to its knees last week when he tweeted about our exclusive track-by-track interview about his new-for-2010 debut solo album, Slash has also revealed the personnel in the band lineup for his forthcoming tour. How on earth does the man find the time?

Still want more Slash?! Check out this great video interview posted on 10 March on the Gibson website in which Slash talks in depth about the new Appetite Les Paul and his solo record.