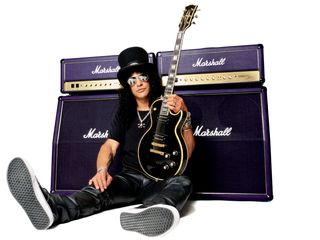 Slash says all is cool. Just be patient

Worried that Velvet Revolver might never find a new lead singer? That they might be kaput? Don't be, says Slash, who has just issued an update on the band's search for a vocalist.

"I've been receiving a lot of questions about Velvet Revolver," Slash writes on his blog. "Mostly about if we have found a new singer and if we're going to tour again. In response to the former, no we haven't found a singer yet.

"There was a lot of talk about our announcing a new singer in March but it obviously didn't happen. We had somebody that we thought was a really good candidate, but it just wasn't meant to be. So, we're still looking."

"In response to the latter question, of course Velvet Revolver is going to tour again, we just have to find the right person to front the band. We have a bunch of new material and we're all anxious to get going, but the key ingredient for a rock & roll band such as VR is an amazing frontman, and we haven't found the right man for the job, yet."

So there you have it. Have you sent in your audition tape yet? From the sounds of it, you still might have a chance at the gig.

Full-speed ahead on solo album

In other news, Slash is excited about the solo album he's working on. "Things are going fantastic in the studio," he reports. "Josh Freese and Chris Chaney are one hell of a rhythm machine and the guitar sound is FAT! Fucking awesome tone!

"All is going perfect so far. We start recording vocals today and I'm really excited about working with this particular individual [who that is, he doesn't say], so it's going to be quite an event."

After he wraps his solo disc, Slash hopes to be announcing VR's new vocalist. "If not before," he adds.