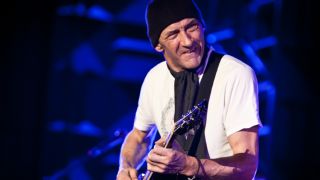 "For some reason, it passed me by at first," Simon Townshend says of Quadrophenia. "It took me a while to really listen." (Image credit: Daniele Rotondo/Demotix/Corbis)

Although he joined The Who in '96 as a second guitarist, that year's Quadrophenia tour wasn't Simon Townshend's first appearance with the band. At the age of nine, he sang backing vocals on the song Smash The Mirror, from another iconic Who rock opera, Tommy.

"I sang the vocal line that ascends - 'Rise, rise, rise, rise,'" says Townshend. "I was in the studio hanging out with my other brother, Paul. We didn't see much of Pete in those days, so he took us to the session with him. I remember it was a really late night, and around one in the morning, they stuck headphones on us, and away we went."

Currently, Townshend is out on the road with brother Pete and Roger Daltrey on The Who's Quadrophenia And More tour, which kicked off last month and will run until 26 February 2013, but he's also maintaining his second day gig as a solo artist in his own right. He recently released his fifth album, Looking Out, Looking In, a wonderfully diverse affair that draws on his family's rich musical history (in addition to his famous sibling, Townshend's father was a professional saxophonist while his mother was a singer for a brief period).

We sat down to talk with Townshend about playing in The Who, being surrounded by rock stardom as a kid, his own music, along with his thoughts and memories of Keith Moon and John Entwistle.

What was it like to be a kid and have a rock star for a brother? Did it seem normal to you? What was normal?

[Laughs] "It wasn't entirely normal, no. I think I got treated differently at school by some of the kids. The Who were a big band in England, and there were teachers who didn't like the whole rock 'n' roll thing. Some were cool with it, though. It balanced itself out. I had some kids who didn't like the fact that I had a little bit of attention coming my way, but you know, it just couldn't be helped."

Is being Pete Townshend's brother a burden sometimes? A lot of doors are open to you, but do you sometimes think that you'll never be judged on your own merits?

"Yeah, I know what you mean. It used to be a burden in that way - I was getting compared to Pete all the time - but right now it's a big help. I look at it as a positive. First and foremost, I'm enjoying the journey. I've got a good life, and I'm happy with what I do. I'm producing new music, and there's nothing more satisfying than that.

"I've been given a lot of opportunities, and I've done what I could with them. So here I am, I'm also playing to big crowds, getting a chance to sing lead vocals and express myself as a guitar player; and then there's the other side where I'm playing in small clubs, and I'm going out every night to meet the fans and sign autographs. It's quite a lot of fun, really.

"If I wanted to sit and mope around because my brother's a big superstar and I'm not, well, I could choose to do that, but I don't. The thing to remember is, it's mainly about the journey, isn't it? It's about being happy in your own skin. There's nothing worse than an unhappy person."

The phenomenon of being in the shadows of a famous family member - is this something you've talked to others in your position about? Do you and Zak Starkey ever discuss it? [Starkey's father is Ringo Starr.]

"Yeah, that's funny - Zak. I never think of him in that way myself. We're both so different; we don't have that kind of conversation. He's just a great, unique drummer in his own right. But yeah, his dad is very famous. I don't attach that stigma to Zak. He's got his own band project going. He's waiting for the right time to launch it. I think he's not going to use his own name too much with it, because you know, there will be all of those connections with his father. I can see that. I come from that thing myself."

In your own music, how much of an influence has Pete been? Are you conscious of it?

"I've been influenced by The Who a little bit over the years - obviously, I think. I think it's more of a sound rather than melodies or the way I approach songs. But I've also been influenced by a whole lot of other stuff. I grew up in the '70s, when music was so amazing. It was the golden era, really. Every week you had brilliant music coming out that was changing all of our lives.

"Yes, The Who was clearly one area of music that I really loved. I saw The Who 36 times when Keith Moon was in the band. I lived it. It was a big, big part of my life, but at the same time, so was Stevie Wonder. I had a period where I loved Genesis and The Jam, The Clash… so many things. Even Bob Marley - I've definitely had my time loving him and listening to him consistently.

"So, obviously, The Who weren't the only band that I loved. I meet a lot of people, a lot of fans, and for them The Who is the center of their universe. I understand that, and I respect that, especially with albums like Quadrophenia and Who's Next, which changed people's lives. I understand and relate to that, but you know, I got into Quadrophenia three years after it was released. It took me a while to really listen. I'd heard it on the radio, but for some reason, it passed me by at first."

How well did you know Keith Moon?

"Reasonably well, not intensely well. I would go back and see him at shows, and he would be a bit of a live wire. Me being so young, I think everybody was thinking, Well, let's keep Simon away him. [Laughs] He was a nice guy… when he was sober. I would play backgammon with him - he didn't like losing much. I was only about 14 at the time."

Of the current Quadrophenia tour, Simon (seen on stage with Roger Daltrey and brother Pete Townshend) says, "What we do now is more of a band thing - it's more The Who." © Tim Mosenfelder/Corbis

On the subject of family lines, your son Ben plays drums on your new album. That must have been great for the two of you.

"Absolutely, it's fantastic. I've worked a lot with Ben. He's played in my band. We toured America. He's a really great musician and a fantastic drummer. Something I've learned over the years, though - great musicians can be a song's worst enemy. They just want to show how good they are. You have to be careful who you choose. Ben understands that. He's got an incredibly empathy, and he chooses what a song needs. He's got a lot of restraint."

On that note, what have you learned about playing with The Who, who obviously have great songs but put a lot of showmanship into performances?

"Well, there's the recording aspect, but live things do go off on a different tangent. Keith Moon played to the song. A lot of what he did on the toms, he had specific grooves. If you listen to the recordings, they're not typical parts, but they all fit. You have to know what is right, when to say, 'It's done' or 'It's not right, let's do it again.' Live, you don't get that second chance, so you have to make sure it's right the first time."

Let's talk about your album. How long did it take to record?

"I started writing a few years ago, here and there, and then I had a real burst of creativity. I took probably two years for creating the record."

I love your use of strings. How are you as an arranger?

"I'm not bad. I arranged those, but it wasn't intense. I didn't go too mad on the strings. I had some ideas to put across the melody. I'm sure I could have made it better, but at the end of the day, it's about keeping the song."

"When we did this show in '96 or so, I wasn't really proficient on the guitar," says Townshend. "I know what I'm doing now." © Ron Lyon

In the song Stay, there's quite a few '70s references style-wise, sound-wise. You mentioned being a huge fan of music from that era.

"Yeah, it's got some wild guitar things, that song. You know, I played the album for myself the other day, and I noticed that about Stay. I'm glad I put it second on the record. It works real well establishing the flow and opening things up for people. It shows them that they're going to get something different, a lot of diversity."

You said that you didn't get into Quadrophenia at first, so what's it like for you being on tour with the album? Does it have a different life to you? Does it mean something new?

"When we did this show in '96 or so, I wasn't really proficient on the guitar. I know what I'm doing now. It's something I've worked really hard on over the last 15 years. Now I'm really stepping up and enjoying the challenge and responsibility.

"I love being part of this. I love playing Quadrophenia. Back then, it had a lot of guest stars and was more of a production. What we do now is more of a band thing - it's more The Who. It's cooler the way it is now. It's got a segment with John Entwistle and one with Keith Moon. It keeps it more in the family, more of what the piece originally was."

You did get to play with John Entwistle, and now, of course, you're playing with Pino Palladino. How would you describe their differences as bassists?

"I did the last Quadrophenia tour with John. It's a different dynamic. Pino is a good mate of mine, whereas with John, although he was a friend, he was more my brother's age. As bassists, it's a big question to answer. Pino is maybe lighter under the fingers, perhaps more schooled, whereas John was more rock 'n' roll and probably hammered the strings more.

"Pino knows The Who's music. He's worked with Pete so much on different projects. He's got that sort of family empathy that I have and that Zak has. We are the nucleus of what is left of The Who. Some people are calling it The Who II, but I don't like to do that. You'll never replace Keith Moon and John Entwistle."