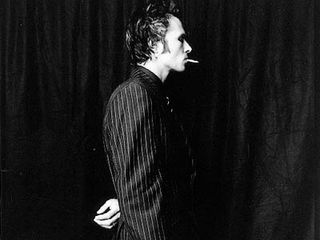 I am the Loogie King!

Scott Weiland knows how to answer a question. Responding to a reporter from the Los Angeles Times, who asked the Stone Temple Pilots singer how he felt about being sentenced to eight days in jail for a November 2007 drunk driving charge, Weiland simply spat a huge green loogie at the wall, narrowly missing two of his bandmates, Robert and Dean DeLeo.

It was downhill from there. The gaunt, sullen vocalist, now on a 65-date reunion tour with the Pilots having left Velvet Revolver last spring, proved to be a combative interview. The rest of the exchange is as follows:

Where's your head at right now just before going to jail?

All these questions are…man. Who do you interview? To what level?

A lot of famous musicians. Not Michael Jackson-famous, though.

Do you interview Keith Richards? David Bowie? Do you interview people who over a 20-year career who aren't…born-again Christians? Who aren't part of the Mormon Tabernacle Choir?

Um, yes. A lot of those guys. I interviewed Bowie, but not Keith.

Then you should know. Our contribution is music, you know? This is the problem with the press. Are you part of the paparazzi?

I write for the Los Angeles Times.

Is there a difference anymore?

I'm not so sure, man. Rolling Stone is borderline these days.

If I've said something that put your nose out of joint, I apologize.

My nose isn't out of joint. I live my life the way I live my life. I don't have to make any apologies. I just find it a little hilarious that you'd ask such a question. Cccchh-www-thhsptttt [Weiland spits on the wall].