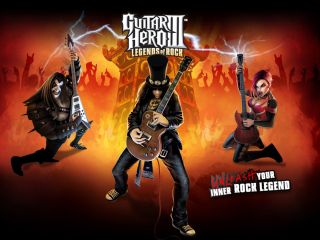 Shred virtuosos Satriani, Vai and Buckethead are now alongside Slash in pixels. Just how fast are your fingers?

Fans of breakneck instrumental guitar should mark 24 July 2008 in their diaries as the day that Joe Satriani, Steve Vai and Buckethead tracks join the likes of Aerosmith, Guns N' Roses and The Rolling Stones on Guitar Hero playlists.

Sure to test the digits of gamers across the globe, the Guitar Virtuoso Track Pack will be available for download on Xbox 360 and PlayStation 3.

Tracks include Satriani's iconic 1987 hit Surfing With The Alien, alongside Vai's For The Love Of God and Buckethead's Soothsayer.

For a taste of what Buckethead has to offer - and we're not just talking KFC - you can also access his song Jordan through the Guitar Hero 2 area of Xbox Live and the PlayStation Store.

It's not the first time you'll have heard Vai in a gaming context - Halo Theme (Mjolnir Mix) featured in Halo 2 and you can download it as a free add-on for the Xbox 360 version of Guitar Hero 3.