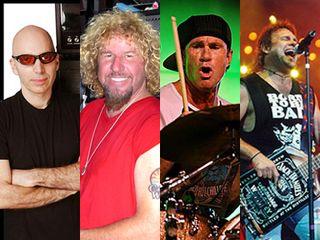 There's only one way to Zep

Sammy Hagar is excited about his new supergroup, Chickenfoot, so much so that he says the band "could rival Zep."

"When people hear the music, it's Led Zeppelin," Hagar enthuses. "I know that's a bold statement, but it's as good as that." The Red Rocker then compares the group to another musical entity, one he has had some experience with: "It's ten times Van Halen, because it's functional - we all like each other."

For his part, Joe Satriani is jazzed about the project but is less hyperbolic than Cabo man Hagar: "We're having a very fun time. For years now I've wanted to do something with a real vocalist and a real band, and I came close a few times but nothing really panned out. This time is different. What I'm doing with Sammy and the rest of the guys feels right. We get together, we have a lot of laughs, and great things happen musically. I'm thrilled, and I can't wait to get our ideas recorded."

Interestingly, MusicRadar has just figured out that the intials of Chickenfoot's members - H.S.A.S. - are exactly the same as another supergroup in Hagar's past. Coincidence?