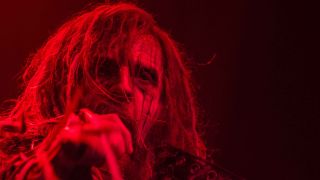 Since rising to fame with White Zombie in the '80s, the 49 year-old Massachusettiasn has not only shifted an impressive 16 million albums, he's also written and directed eight horror films, successfully rebooted the Halloween franchise (to the tune of nearly $120 million), and even helmed an episode of CSI: Miami. Alongside this he's built a reputation for one of the most unmissable, theatrical live shows since Kiss' pyro-friendly heyday.

We caught up with the metal legend to talk about being a one-stop creative shop, his hatred of recording studios and how to put together an unmissable concert.

Most people struggle to master even one creative avenue. What's been key for you in developing those different skill sets to a professional level?

"I think that it was just the fact that I was so naive about what any of these fields required. I think sometimes people try to learn too much, or get too old before they start and can look at it like, 'This is a million to one - why even bother?' But when you're young, you don't think about it. You're too stupid to think about it! So I would always rather go do it myself and make a million mistakes then figure out some kind of system. And that's a horrible way to do it - I don't recommend it! But that's just the way I do it. I think that's why I do it, because it stays fun."

How do you juggle multiple projects?

"I'm very scatterbrained, I can't focus on one thing at a time and I've never been able to do that, so luckily having multiple projects works in my favour. I can work on this for a while until I get bored and then work on something else and slowly they all get done. I'm not the type of guy who goes, 'I'm gonna sit down and write this script.' I'll sit down, I'll fart around with it for an hour and then I'll move on to something else, but I'll do it every day and somehow, after a couple of months, it's done - and so are the songs, the lyrics - and that's how I approach everything."

Do you consider yourself a control freak? Do you delegate?

"There's really no one I can delegate to, these are all artistic pursuits - either you'll do it, or you'll not do it. The type of thing I delegate is saying to John 5, because I trust John with everything, 'Get the band together, you guys rehearse for a week before I get to town and then I'll come in and play with the band.' That's about as much as you can do. Because even if the merchandise company comes up and goes, 'We have 20 new T-shirt designs!' I'll look at them and go, 'None of these seem like they came from me.' So I'll do it myself. But that's not being a control freak. That's just maintaining a level that your fans expect of you. If [the T-shirt design] was awesome, I'd go, 'Great! That saves me from having to do it!'"

Putting together the show is a creative act in itself. Where do you draw your inspiration from for your live shows?

"A movie has three acts and you want to keep it interesting all the way to the end. It's the same with a concert, you think, 'What can we do to open the show? What for the middle? How do we close it? How do we keep this interesting?' We're always moving things around the set. Some bands go out there and you're like, 'Oh my god', because whatever they're doing for that song is literally what they'll be doing for two hours. Nothing is gonna change! I always think that each song has to have something to it where the audience is like, 'Well, I can't leave now! What's going to happen?' Sometimes it will just be so much stuff, but I figure it's a show and people wouldn't drive all the way to the arena to listen to a record!"

How can people enhance their shows on a non-existent budget? What would you do, for example, in your early days with White Zombie?

"It's so easy! I see bands all the time and I'm like, 'I wish I could manage these guys. They're really good, but they're fucking boring!' You've got to walk onstage and, at the VERY least: look cool. Even if the stage is bare - at least give me that! Bands like The Cramps, who I love, didn't have any stage show, but they were fucking cool! In the early days with White Zombie, we didn't have any fucking money, we were the poorest band around, but we always managed to do something. You don't need a lot of money. Alice Cooper would tell the same story about when they were playing the Whiskey [A Go Go in Hollywood], or Iggy Pop, or anybody. It's not that hard!

"At some point everybody became anti-rockstars. They still kind of wanted to be rockstars, but they didn't want to make an effort. They'd walk on stage looking like the road crew, wearing shorts and a free T-shirt they got from a guitar company and stand there and act like it was soundcheck."

Do you think bands are afraid to be seen to be making an effort?

"Well, even back in the day, I don't want to name names, but there were certain band members [of White Zombie], who didn't want to do what we were doing. They'd say, 'What are my friends going to think?' It was like, 'Who gives a shit! They're going to think you're a fucking rockstar!' This was the thought process. And I don't mean be a 'rockstar', like some pompous douche bag who can't do anything for himself. I mean get onstage! It doesn't matter if you're Dave Lee Roth or Henry Rollins - give me something!"

Where do you prefer to write and record music? Do you have a home studio?

"No, it's all a waste of money. When it's time to make a record, we call somebody who has that stuff, we set it up, we use it, we pack it back up and then we ship it off. Every single person I know made the giant mistake of going, 'I'm going to build a home studio and I'm going to buy all this gear!' But now they're broke and they can't wait to get rid of all that gear. If you're Prince, or you're some maniac who's going to record 50 albums a year, great - that guy needs a home studio - but for the rest of us, not so much!

"We were really inspired when we watched that film 'Stones In Exile, where they made Exile On Mainstreet in that house in France. It was like, 'That's what we should do! We'll bring in a mobile studio and plop it down in a house in the country and make a record.' I hate regular studios. You go in, there's your parking space, the secretary, the pink room where people hang out and play pool - all of it's bullshit and none of it has anything to do with writing music. We just got rid of all of that."

You've a hugely recognisable voice. Was it always your intention to develop a distinctive vocal sound?

"When we were starting out, we weren't thinking anything. It was just, 'Wouldn't it be great if we could start a band, or write a song, or get a show.' Those things develop over time. The main thing was that I didn't want to be everyone else. Now it seems like everybody WANTS to be like everybody else. They wear their influences on their sleeves. We didn't, it was like 'I like this and that, let's put it all together.' The goal was to create a sound that didn't exist."

So how much of your sound is down to your singing voice and how much to production?

"The funny thing is that, especially back in the day with White Zombie, we were so naive that when we finally went to make our first Geffen record, I would go in there do one track, no effects - and that was it. I didn't even double-track the vocals because I literally didn't know that people did that. I had no idea. I just thought, 'OK, we'll set up like we're playing a live show and mic the equipment.' That was how we made records and that's kind of good. Most people know too much now!"

Finally, you're heading over for Download festival this June. How much of the show will we be getting?

"We were there two/three years ago and we did a pretty big show, so we want to come back with something different, but we haven't figured it out yet. We always want to do everything, but boy is it a bitch getting it over there. It's going to be awesome, no matter what, but if there's something we don't have that you've seen pictures of, it means it got broke in shipping!"

Rob Zombie's first concert film, The Zombie Horror Picture Show, is released on 19 May. He plays Download festival on 13 June. Head to the official Rob Zombie website for more information.