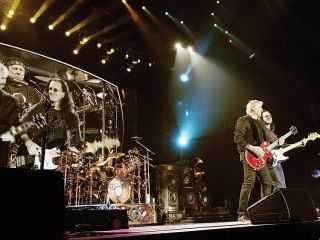 Roadrunner Records has announced today that it has added Canadian prog rock power trio Rush to the family. Check out the press release from Roadrunner below for more details.

Roadrunner Records is pleased to announce a new worldwide partnership with Anthem Records and rock trio Rush. The band will remain on Anthem/Universal Music in Canada only.

"We have tremendous respect for Roadrunner Records, and what Cees Wessels and Jonas Nachsin have built on a worldwide level. After years of Roadrunner pursuing the band, Tom Lipsky presented a deal that worked and the timing was right. We wanted to be at a label focused on the rock genre - and that's Roadrunner," said Ray Danniels, manager of Rush.

"In another life I worked with Rush and their great management team more than 30 years ago and to have Rush finally on the Roadrunner label is a dream come true. I am grateful for Ray Danniels' confidence in this new partnership," said Cees Wessels, Roadrunner Records Chairman.

"Rush has a tradition of excellence and independence, both in the studio and on the live stage, and they remain as prolific today as at any point in their career. We are excited to be their label partners," said Tom Lipsky, President of Lipsky Music, LLC, who brokered the significant deal for Roadrunner.

The first release from RUSH through this deal will be various live configurations, recorded during their highly successful Time Machine tour that wrapped earlier this summer. Details of the release will be revealed in the coming weeks.