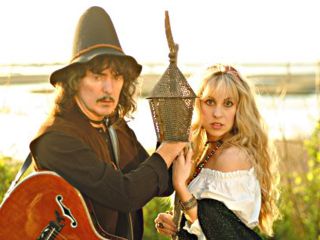 Blackmore and his fair maiden

Remember when Ritchie Blackmore was a blazing Highway Star? When he created the riff that everybody must learn the second he picks up the guitar? Remember when he led the then-loudest band in the world, Deep Purple?

Well, don't look for that Ritchie Blackmore on his newest album, Secret Voyage, by his band Blackmore's Night. It's yet another jousting, leg-o'-mutton in the air, Medieval Times-themed collection of renaissance fair minstrel tunes, the kind he's been doing for some time now.

Blackmore been involved in numerous and bitter legal battles with the Deep Purple camp over royalties and other business issues (and for the last ten years guitarist Steve Morse has taken his place in a touring version of Purple), and so now, whenever he discusses Purple, his comments are curt and condescending. His focus these days is squarely on Blackmore's Night. Granted, his rather fetching wife, Candice Night, is the vocalist in the outfit, so Blackmore might be locked in some sort of feminine voodoo hex - and hey, why not? But is playing renaissance fairs really as thrilling as rocking arenas was with Purple back in the day? To millions of rock fans, Blackmore has gone off the deep end. But according to Blackmore, he's having the time of his life.

"With Blackmore's Night," he says, "we have the creative freedom to play any style of music we want. We can play folk, rock, ballads, instrumentals, or tavern songs. I couldn't do that in Deep Purple. Now I feel as if I'm not in a box anymore."

To be fair, the man is 63 and he's playing in a band with his lover, who is 37 - obviously, he's enjoying himself in more ways than one. Even so, wouldn't it be cool to hear him bust out Smoke On The Water at least once more? Chances are, even the renaissance fair trinket sellers would be air-guitaring.