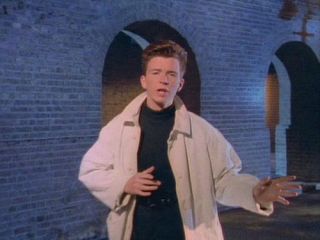 Rick Astley: back when his dignity was still intact.

The practice of 'Rickrolling', which has seen countless internet users fooled into watching the video for Rick Astley's 1987 hit Never Gonna Give You Up, took another surreal twist yesterday when the star performed the stunt live in New York.

This formed part of department store Macy's annual Thanksgiving Day Parade. Astley appeared out of a float dedicated to the characters from US children's TV show Foster's Home For Imaginary Friends and mimed to the song.

Earlier this month, he was voted the Best Act Ever at the MTV Europe Music Awards - another side-effect of the Rickrolling phenomenon.

You can watch Astley's Thanksgiving prank below.