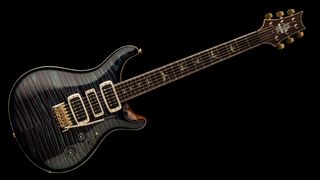 It's been anniversaries a go-go lately for PRS - this year celebrated 30 years of Paul Reed Smith's guitars, while next year marks two decades of the company's ultra-high-end Private Stock models, commemorated with an all-new guitar.

Just 40 of the 20th Anniversary Private Stock guitars will be built, with features that recall Howard Leese's Golden Eagle model.

Mr Smith has engaged pinpoint precision with this new model, spec'ing modified body dimensions - with a 1/16" thinner top and 1/8" thicker back than normal PRS Custom bodies - plus a 24.6" scale length and hand-selected East Coast curly maple tops from two of the best batches of maple in PRS history.

Pickup-wise, the 20th Anniversary model is packing two narrow 408 treble and bass, as well as a Narrowfield in the middle position.