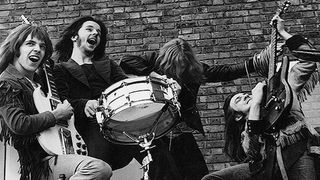 "If you don't go for something and fail, then, you know, it's safe."

In 1976, the multi-million selling Frampton Comes Alive! made him a household name in the US, but five years earlier he'd had a brush with the US charts with another live album. Humble Pie's Performance: Rockin' the Fillmore showcased Frampton's unique guitar sound as it was born, right there on stage alongside former Small Faces frontman Steve Marriott.

With Rockin' The Filmore's reissue - a complete box set of the four nights at the venue that were edited down to create the single album - we caught up with Frampton to talk Humble Pie, long lost guitars and the birth of a sound…

What was the status of Humble Pie at the time of Rockin' The Fillmore? How much do you remember of the gigs?

"We were almost at the point of being a headline band I guess - Lee Michaels was the headline act those two nights. At this point of our career, we were like an SAS unit. If someone didn't turn up, they called us - 'oh, we'll send Humble Pie, they'll take care of the situation! Send in the Pie!'

"We played the Fillmore more times than I care to remember before this, and we had a really good following in New York because of that. We weren't headlining so we only had a 50-minute spot. We weren't going to have a lot of choice of what was on the album, we were basically going to have to use everything.

"So we made the decision, bought in the Fed Co truck and Eddie Kramer to engineer, and off we went for the four shows, then went ahead for the original album and chose what we felt were the best performances of the four shows. I think a lot of it comes from one night - I can't remember, actually!

"But what I do know is that when Jerry [Shirley, Humble Pie drummer] and I started listening to all the other shows, I think at the time we said 'Oh, that's no good, that's the best one' - I'm not even sure we listened to all of it. Going back and listening to it, we were wrong!

"It wasn't that what we chose wasn't the best, it possibly was depending on what criteria you were using to choose it. But to actually hear some of this stuff 40 years later, we were pretty good!"

It must be nice to go back and surprise yourself.

"It was! There's some green notes here and there, as there always are in life. But that's what it's all about! If you don't go for something and fail, then, you know, it's safe."

That's often the beauty of live albums, you get that spontaneous feel.

"Well we were very much on the cutting edge of ourselves [laughs]! We were pushing the envelope of our own band, of our own possibilities.

"In the studio sessions, it was a great band with great material, and we played great together and we made great records, but as soon as we stepped on to the stage it was like the gloves came off.

"I often explain it to people that if you listen to a Who record, and then go see the Who live, it's like two different bands. That's how Humble Pie worked. We were definitely a lot more ferocious live because of the energy that the entire population of us had.

"Jerry was bombastic on drums, Greg [Ridley, bass], my dearest friend and we've lost him obviously [Ridley died in 2003], but he was an animal on bass, and I loved that. He went for it every night, just a phenomenal player and the amount of soul and passion that he put into his playing and singing.

"And obviously there's not enough words to say how big of a fan, and what a thrill it was, to be in a band with Steve [Marriott]. Yeah, it's documented that we had our sort of brotherly ups and downs, but that's what makes for a great band."

You have to have that friction, that push and pull.

"Yeah, you know, the bottom line was I was such a huge fan of Steve, and it was reciprocal of my playing and my approach, which was different to a lot of other guitar players.

"The combination was us all pushing and pushing, and live we were something else. Listening to these tracks now is just phenomenal to me that we did what we did. And I was 18 or 19!"

You were so young…

"And Jerry was 17! And it sounds like we've been doing it a long time, but we were actually making it up as we were going along.

"I don't think I could ever be in a band if we just had to go out there and play the record note for note, I'd give up, I'd become a banker."

As a band, how did you work that out? Were you big on rehearsals, or did you get a rough idea then get on stage and see what happened?

"We were a big rehearsing band. We used to rehearse a lot down near Steve's cottage in Essex, Magdalene Labour Village Hall, ha! We had a kitchen, we made our tea, rolled a joint - I was not an imbiber at that point. I caught up later, don't worry! But we'd pause, someone would bring in a lick, we would jam.

"So, for instance, Stone Cold Fever, I bought the opening riff in, which is the verse as well. I'd start playing something and everyone would join in and we'd see where it went. And then Steve would add that, do do do… and we'd arrange it, spend all day doing that. Someone would say 'cup of tea?' We'd roll a joint and disappear to the kitchen there in the village hall.

"We'd all sit on the counter, make some tea, smoke a joint and write the lyrics. I think that one was all Steve's lyrics, he'd disappear for 20 minutes and bingo, there it was. But usually, with a lot of them in those days, Steve wanted everyone to sing. He wanted it to be a band, which was great, so we'd each write our own verse lyrically. We'd retire to each corner, go and write, and come back after tea and I think beans on toast for lunch, and we'd try it out."

The Rockin' The Filmore box set.

Obviously Steve had been successful with Small Faces and then came into a band with you guys. How did that transition work?

"Well I think that the fact that he enjoyed my style of playing. We got together when I was in The Herd, we were being ripped off and the Small Faces had been through that. Ronnie [Lane] called up and said they'd been through it already, and did they want to meet up so they could give us some advice.

"We went down to Marlow where the two of them were living, and we talked about everything and started jamming, and I don't think I left for the weekend. Ever since Whatcha Gonna Do About It live on Ready Steady Go, and my jaw's on the floor with this little tiny guy singing with this huge voice, I thought 'Oh my go, I want to play with that guy!'"

"And my dream came true! Who would have ever thought? Steve took a liking to my style and my playing, and obviously I was the biggest Marriott fan, and Small Faces fan, and that was it. He was helping me find band members.

"We did the Johnny Hallyday sessions in Paris. Right after that he came back and did the last gig at Alexandra Palace, and that was the end of Small Faces. He called me up and said can I join your band, which he was helping me put together."

What a lovely call...

It was wonderful! I was at Glynn Johns' hotel room in Paris. I still hadn't left after the session that I did with Small Faces.

To shift gears a little bit, what was your set up at the time?

"Everyone wanted to play like Eric Clapton in the early to mid '60s. I decided I wanted to play like Eric Clapton too, but there were already enough people doing it, blues is very seductive. I had always been a jazz fan - Django Reinhardt, Kenny Burrell, Wes Montgomery, Joe Pass, the early George Benson. And I come from the Hank Marvin melodic upbringing. So blues, I loved, but I also liked jazz. Therefore my style was more lyrical.

"Yes it was rock, but it was jazz tinged as well as the blues. Humble Pie I credit with me honing my style, and coming up with the style I have today during that period. I was always on the neck pickup, the more jazzy sounding pickup, whereas Steve was always on the bridge pickup, and that was the great sound between the two of us.

"And it's the same guitar that I thank God have back now after 32 years of it disappearing. I call it the Phoenix now, the Black Les Paul. It went down in a plane crash in 1980 (full story here), but I'd just been given it in 1970, which was when the album was recorded. I hadn't had it long, but it was that guitar straight into two Plexis, one 100 and one 50, both into slant cabinets. Not the bottom cabinets as I use today."

"It's the other side of the bed right now. It doesn't leave my side. There are only three of us who are allowed to touch it, and if one of us hasn't got it there's trouble!

"There's rules about it - when I finish playing it has to be taken out immediately and put on the bus, and it actually travels in bed with me sometimes [laughs]. I'm serious! It's not a sexual thing. Ha! It's such an iconic guitar because not only was it on Rockin' The Fillmore, it was on Comes Alive and it was on every session I've ever done."

What is it about that guitar that makes it special?

"Well it's not the best Les Paul in the world, but it's just //my// Les Paul. It just has a special sound. It's not one with a maple top, it was originally a black beauty and it was converted into a three pickup custom. It's very light, and the early ones, that light mahogany had a sound. It's unbelievable. I can't even put it in to words how I feel about it!"

Performance: Rockin' The Fillmore The Complete Recordings is out now.