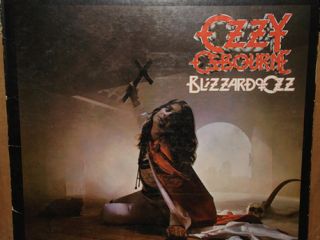 To celebrate the current reissues of Ozzy Osbourne's Blizzard Of Ozz and Diary Of A Madman, Osbourne bassists past and present - Rudy Sarzo (1981-1982) and Rob 'Blasko' Nicholson (2003-present) - got together to relive some of the highlights of their time with the rock's Prince Of Darkness.

Long revered by music fans around the world, these two albums created a template for hard rock in the 1980s and beyond as they were marked by the groundbreaking and historic union of Osbourne and the late guitar hero Randy Rhoads. These definitive versions of 1980's Blizzard Of Ozz (with previously unreleased bonus tracks) and 1981's Diary Of A Madman are available individually on vinyl or CD, or together in a deluxe collector's box. All versions were restored and remastered from the original analog sources by George Marino.

What do you think of when you you hear the name Ozzy Osbourne?

Rudy Sarzo: "With Ozzy, I was personally a fan before I joined the band. Once I joined the band, that took it to a whole different level. When I think of Ozzy now, I think of playing with Randy Rhoads. Randy was responsible for me joining the band since he and I played together in Quiet Riot. When Ozzy was looking for a bass player way back in 1981, Randy recommended me. It was my first arena band. Before then, the most people I'd played to was a full house at the Starwood in Los Angeles which held about 1,000. That was about it.

"As soon as I started playing with Ozzy, we were doing arenas, stadiums and so on. Not only was I playing with the most incredible band I've ever had the pleasure and privilege to play with, but it was also virgin territory for me. It was the spark of everything that I've done ever since."

Blasko: "Like Rudy, I was clearly a fan first. Ozzy is my boss, but he's my friend, as well. It's an honor to be able to get on stage and play all of those songs with him. There's a 40-year lineage of awesome music."

What has Ozzy's impact been on you personally?

Sarzo: "He and Sharon gave me my first break. I went from sleeping on the floor to having a chance to become who I am today. The only reference that they had was Randy recommended me. I could've been a total maniac, but they gave me a shot. [laughs] I will be forever grateful. I also learned the difference between the real deal and bullshit by being in Ozzy. Once you play with Ozzy, you know what the real deal is."

Blasko: "That's true. It's two-fold in a way for me. Black Sabbath and Ozzy Osbourne are my demographic. The only reason I even play music is because of Black Sabbath. Now, here it is, I'm 41 years old and I'm actually playing with the guy who's the reason I play music. It's weird. How often does that happen? You're actually playing with the guy who made you want to play music in the first place."

Sarzo: "We've all started out as fans. I've been a fan of music a lot longer than I've been a professional musician. To actually get to play with our heroes - the people who got us into doing what we do - is an incredible blessing."

Blasko: "Growing up, you don't even think you'll meet your heroes, let alone play music with them. The reason why Ozzy is so real is if you ask him the same question, he'll give you the same answer. He grew up worshipping The Beatles. The only reason he plays music is because of The Beatles. You wouldn't think that Ozzy would be starstruck. He was beside himself when he got to meet Paul McCartney. In his mind, he's in no way the icon that we look at him as. That's why his fans relate to him so much. He doesn't put himself as bigger than they are. He may be the guy on the stage, but he's not out of the spectrum of being a fan as well. He doesn't buy into his own hugeness."

Sarzo: "Randy was responsible for me joining the band since he and I played together in Quiet Riot." © Neal Preston/CORBIS

What are your favorite Ozzy songs to play?

Sarzo: "For me, it would be the usual suspects - both albums that were out at the time, Blizzard Of Ozz and Diary Of A Madman. As a band, we enjoyed playing any of the songs."

Blasko: "The opportunity to play any of the songs is fine with me. What's better: getting on stage and playing in front of 10,000 people or tarring a hot roof in the San Fernando Valley for a living? [laughs] It doesn't matter what song we play. It's better than doing anything else."

Sarzo: "The crowd will go crazy even before Ozzy goes on stage because they anticipate craziness and the unknown. Every show is completely different. You never know what's going to happen. Even as a member of the band, you don't know what's going to happen. It's amazing to see a crowd reaction that never wavers throughout the whole set. It does climax at the end, but the energy never gets any lower than chaos at the very beginning."

Blasko: "That's because Ozzy won't let it happen. If the crowd is sleepy, then Ozzy gets angry about it. He'll throw buckets of water on them. That's his M.O. That's his business. He gets up there, and he kicks ass. He's giving the energy, and the crowd gives it back. Towards the end, you break out Crazy Train and Paranoid and you get the obvious lift because those are the song everybody in the crowd knows. There is no significant dip over those two hours on stage. It's a consistently energetic audience all the way through. It's pretty intense."

What's the effect that he has on the fans?

Sarzo: "When I first joined the band, it was his crossfade period going from Black Sabbath to becoming a solo artist. Most of the people who came out to see us on the Blizzard Of Ozz tour were Sabbath fans. They seemed to be a little bit more hardcore. Later on, as we evolved, we started getting more of a crossover audience. It was a younger demographic. Also, there were females which I don't really think were a part of the Black Sabbath audience. [laughs] It just has a broader appeal.

"I think a lot of it has to do with Sharon and her vision of what Ozzy is as a performer. That made a huge impact on what Ozzy has become today. Ozzy is known to the heavy metal community. He's also known to people across the world. Everywhere he goes, people know who he is. It's not just the typical places we tour at either. It's anywhere in the world. Rob, what have been some of the most obscure places you guys have been to where people mob Ozzy?"

Blasko: "It doesn't matter. Everywhere is the same. On this last run, we went to four countries that he'd never even been to in his career ever, and it was the same. They're huge places sold out with Ozzy fanatics. Ozzy is a cultural icon. In some ways, he surpasses some guy in a rock 'n' roll band and goes into overall icon status to where I almost get the feeling that the majority of people in the audience are only Ozzy Osbourne fans. It's like that's all they listen to and those are the only records in their collection. His are the only t-shirts they have. They're just Ozzy's fanaticals. That's the vibe I get. A lot of heavy metal fans are fans of multiple bands. They've got all the different patches on their jean vests. The Ozzy crowd seems like a mob of fanatical Ozzy fans."

Sarzo: "You're definitely right. There are metal fans who are fans of many different bands, but every metal fan is a fan of Ozzy."

How has Ozzy evolved? How has he stayed the same?

Blasko: "Rudy and I have joked about this before. He wrote that book, Off The Rails, about his time in Ozzy and I'd read it. It's funny that I read it 28 years later from his time period, and I'm going, 'Not a whole lot has changed.' The drug abuse and violence are gone, but the overall daily workings of the Osbourne camp are the same as they've always been. That's just the way it works."

How important is the bass to Ozzy's music? Can you speak to the role of Ozzy's bass player?

Sarzo: "When I was in the band, I played some of the best bass lines I've ever played. Geezer Butler was an iconic bassist. Those parts were not only challenging, but they were fun to play. You were going to go out there and do some significant playing and performing every show."

Blasko: "It's unbelievable. The bass lines on Blizzard Of Ozz and Diary Of A Madman are so significant. They're their own animal. They're unlike anything in Black Sabbath or any other Ozzy stuff even. It's cool that I live down the street from Rudy because Ozzy just gave us a bunch more songs off of those first two albums to learn. I'm just going to bring my bass to Rudy's house and have him show me how to play S.A.T.O. and You Can't Kill Rock 'N' Roll." [laughs]

Sarzo: "Right before the Diary Of A Madman tour, we had a lot of time to rehearse. We learned the whole album, and it was fantastic."

Blasko: "Diary Of A Madman is indescribably awesome. There's nothing like it."

Sarzo: "What amazes me is that Blizzard was recorded six months before Diary. The musical growth in the band was incredible."

Sarzo: "I think Ozzy has got so much more to accomplish that I can't really place him right now. He's not even halfway there. C'mon, he's Ozzy Osbourne! Just saying his name tells you where he is in history. He's way above and beyond any other significant musician or star in the music industry today. Who else compares to him? I can't even come up with anybody."

Blasko: "There's no one else. Even those first 10 years of Black Sabbath history were so crucial. That was the birth of a genre of music that's still going strong. It grows every year into a bigger monster. I'm pretty sure that those four guys from Birmingham didn't plan on this. They just didn't want to work in a steel factory. Creating what they did is a heavy responsibility, and that's historically significant."

Sarzo: "When rock music reinvented itself in the early '90s, I could hear so much of Black Sabbath in bands like Soundgarden, Alice In Chains and the whole Seattle grunge movement. There was so much Sabbath in there."

Any last thoughts about Ozzy?

Sarzo: "Having been a member of Ozzy Osbourne's band is the thing in my career I'm most proud of. It's been incredible just to be a part of his journey."

Blasko: "It's an honor. Without a doubt, it's the greatest experience of my life. There's so much history and respect there. There's no greater honor than to be in a band with such genuine, generous people. Their generosity comes from the heart, and it's a real thing. It's powerful. My life has been changed forever for the better because Ozzy and Sharon are in my life."

Sarzo: "I couldn't have said it any better."