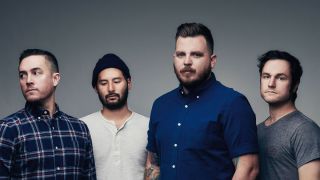 The last time Thrice played the UK, it was 2012 and the California four-piece's farewell London show.

But after a brief hiatus, the band are back. It was a shorter break than expected, and accordingly, getting back in the saddle was no problem for frontman/guitarist Dustin Kensrue.

"It felt great; it felt like coming home to something," says Dustin of the band's return. "I think we've just played together so long that it doesn't take much for us to feel connected again playing."

New album, To Be Everywhere Is To Be Nowhere, is a powerful comeback, full of snaking upper-fretboard work and menacing baritone riffs from Kensrue and fellow six-stringer Teppei Teranishi (the guitarists discussed the album at length in our previous in-depth interview). The band will be showcasing the new songs at Reading and Leeds, and at a headline show at O2 Forum Kentish Town on 25 August.

On Thrice's last trip over, they made the bold decision of leaving setlists up to an online vote; the band won't be employing quite such a democratic process this time around, but there are still surprises in store.

"I counted the other day and we've released 107 original songs. That becomes daunting to make setlists out of," Dustin says. "We're trying to pull out songs that we have rarely or maybe never done from past records, as well as new ones. I think it will feel pretty fresh as a set to fans that have been out to a bunch of shows. I'm excited about that."

Dustin's rig has had an overhaul, too. His long-serving Nash Jaguars are now bolstered by a custom Cave & Canary baritone, as well as a Fender '68 Vibrolux reissue and a heavily modified New Vintage MK36 combo. The frontman has been adding to his pedalboard over the break, too…

"It's a pretty big 'board, and I'm maxed out," he laughs. "I've got three actual drive pedals: a Mojo Hand Rook, a Walrus Audio Messner and a JHS SuperBolt. I've got the EHX POG 2, three Strymons [BigSky, Mobius and TimeLine] and a Line 6 M5 as the Swiss army knife that I can pull in random things with using the [Liquid Foot+] MIDI controller. With all that there, I can do almost anything I need to do."

With such an investment in gear, you can rest assured that Thrice are back for good - and they're taking steps to ensure there are no more hiatuses on the horizon.

"We decided we're not going to tour for more than three weeks at a time," Dustin reveals. "It was always prohibitive before because it costs a lot more to tour that way, but you can either save some money now or you can invest in that longterm health, so that's what we've chosen to do." We're glad to hear it.

Thrice play O2 Forum Kentish Town on 25 August, and Reading and Leeds Festivals on 26-28 August. To Be Everywhere Is To Be Nowhere is out now.