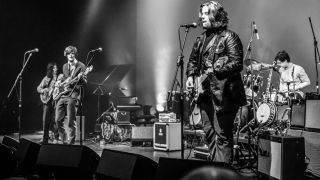 Dundee's finest: "bad to the bone"

Intelligence: There aren't many better endorsements to be had in 2013 that that of Jake Bugg, the all-conquering, One Direction-baiting scamp with a number one album under his belt. Just ask The Boston Tea Party, a blues band from Dundee who can count the mighty Bugg as a vocal fan who has been mentioning their name in all the interviews he can muster (including this one with MusicRadar last year) after they impressed him during a support slot.

"We still can't believe it," says rhythm guitarist and harmonica player Reuben Toy. "Hopefully we'll get to meet up with him again and chat a bit more about music, have a wee jam and that. He's such a good act, I don't listen to many new acts but I saw him on Jools Holland and he was amazing. When we turned up to soundcheck and heard him playing Robert Johnson style stuff, we were hoping he'd come back to see our set, and he did which we really appreciated. He let us play an extra song and gave us some strings - what a guy. It's dead exciting being mentioned on the radio, in online articles, the paper and the NME. He had number one album and he's enjoying our music, which is great."

It's not just about celebrity endorsements for The Boston Tea Party though, a band with a thorough education in the blues. "Three of us were at school together, Sean, Dale and I. We realised once we had finished school that we all loved the same thing - 1960s and 1970s clothing and delta blues, British blues, folk music and so on. We started listening to artists, starting off at Bob Dylan and getting to Mississippi John Hurt, Son House and Blind Lemon Jefferson. I heard Sean play some slide guitar, it was bad to the bone, so I asked if he wanted to start a band.

"We didn't really go to gigs or know much about the music scene, but we liked what we were doing and convinced people to let us play. Often people thought we were away to play some indie stuff - not that indie is bad, but the point being that when we played 60s stuff they couldn't believe what we were doing. At first to make a name for ourselves in Dundee we'd play straight for 3 hours and not take a break."

With a now national profile and a work ethic that puts most bands to shame, you'll likely be hearing plenty more about youngest bluesmen. Just don't expect them to produce a sparklingly modern sound any time soon. "We hope to find some money and record an album with a bluesy, raw sound - like an old Muddy Waters Album."

Further action: Connect with The Boston Tea Party on their official Facebook page.