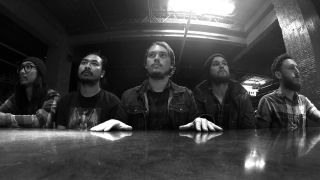 Atlantans O'Brother have been going for 10 years in several guises, but it's third album, Endless Light, that's seen the three-guitar gang begin to master their craft.

According to guitarist Johnny Dang the secret is in the silences. "My mindset is to step back and ask myself, 'What needs to be played here? Does anything need to be played here?' I have that approach to it." he explains.

"For the first records, we wanted a wall of sound, but as time goes on we're tapping into the fact that you can have three sounds with three guitars. It's becoming more minimal and more fun to experiment with that."

The outcome is dramatic, layered rock music, occupying the no-man's land between Radiohead, Deftones and Muse.

Johnny's a Fender man and uses his Jazzmaster Reissue with a '74 Fender Bassman and a custom 2x12 cabinet, then on the floor it's a Seymour Duncan Pickup Booster, Maxon Overdrive and the Electro-Harmonix Cathedral and Boss DD-5, which give room for experimentation.

"A lot of the time we joke about how I don't play half the record!" laughs Johnny, when TG asks for a favourite track to play.

"It's that minimal mindset I was talking about, but I believe my favourite is the opening track [Slow Sin]. I do this little tremolo-picked oscillating noise with the DD-5, then I freeze the note with the Cathedral pedal and make noise on the top of that. That's my favourite moment!"