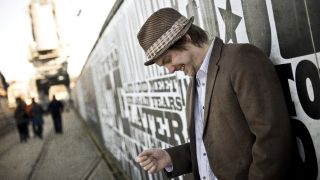 Bristol's finest spots something funny in his invisible newspaper

Intelligence: By now, we all know what to expect at Christmas: the same five songs in every shop, briefly joined by a hastily assembled X Factor finalist's effort to top the festive charts. While most of us accept it, Bristol based singer-songwriter Gaz Brookfield isn't content to sit idly by and watch Cowell and co continue their unchallenged chart domination. His new single Diet Of Banality is a folk-pop swipe at all things manufactured, a paean to musicians who write their own songs and control their own destinies, and a catchy foot stomper to boot.

"I'm just trying to give people the option of buying a single at Christmas time that doesn't exist solely to generate money for corporate record companies," says Gaz. "I've had number of folk say to me that they think that song would make a good Christmas single. I know it's not going to be number one, and I doubt it will even chart, but even if that happens it kind of proves the point of the song anyway. It's just a bit of fun really, but with a serious message."

Solo since 2006, Gaz has notched up over 700 gigs since then, including support slots with the likes of Newton Faulkner, Frank Turner and most recently The Levellers, who decided to take him along on tour after a barnstorming support slot at the Bristol O2 Academy. "After I came off stage the tour manager asked me if I'd like to do the rest of the tour," says Gaz. "It was a dream come true really. My song Limelight is about how that kind of thing never happens, and now it has, I feel like I can't sing that song anymore."

A genuine DIY musician with a work ethic that would put most bands to shame, Gaz has spurned to traditional music industry route and proved that you can make things happen with little more than an internet connection and a fist full of songs. "I've never sought any kind of record deal or management," he says. "You can do it all yourself these days. With a PC and bit of get up and go, you can book all your own shows, record your own albums and keep in touch with fans."

It's no easy task holding a crowd with nothing but your voice and an acoustic guitar, but Gaz's live set, honed to perfection thanks to a relentless gig schedule, is an engaging mix of shout along choruses, genial storytelling and a driving percussive playing style. "I started doing this a few years back after a backstage chat with Newton Faulkner," says Gaz. "I asked him his opinion of loop stations as I was considering getting one, and he said, 'why not learn how to play the beat and the tune at the same time?' . Challenge accepted! I only use it if the song benefits from it. It's by no means my main trait. I think that would probably be playing the same four chords in every song, and shouting angrily."

Diet Of Banality is out on 16 December and will be available on iTunes. Gaz is also headlining an end of the world show at The Fleece, Bristol on 21 December, Apocalyptapalooza! where he'll be playing with a full band, and supported by Jim Lockey and The Solemn Sun (fresh from supporting Frank Turner), Lonely Tourist and his band, Chris Webb, Sam Scott and Harry Swann. Tickets are available from The Fleece's website for £5, with everyone who attends receiving a free limited edition EP.