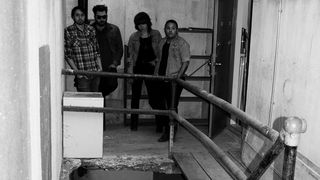 Derelict buildings and lo-fi punk: a match made in moody band pic heaven

"We like being road crazy, it makes life manageable." So says Kier Griffiths, singer and guitarist in lo-fi punk-pop types Fist City, summing up the band's approach to organised musical chaos.

With two albums of scratchy, sugary songs behind them and a live show that comes alive in dark sweaty rooms, Fist City are doing all they can to make suburban Canada worried.

"We like to have at least three or four songs in a row that we don't stop," says Keir. "If you're not sweating in the first three songs you're not doing it right. You have to come out of the room dripping head to toe in sweat and beer."

Formed from the ashes of bands that had imploded in their hometowns small but busy scene, this is a band that isn't hanging about waiting for things to happen. "January 2010 was our first show, so it's been three years," says Keir. "Hunting You was our first full length, and it was thrown together in about a month.

"We wrote twelve songs, just f**king blasted through them, and then all of a sudden we had a record. That was picked up and put out on a label. But then we were very happy to take our time with the second record. We put it out Black Ten Press, and that's It's 1983 Grow up.

Recording in basements and touring as hard as their pockets will allow, the members of Fist City come from a scene that makes the most of what it has: "This is a really small town with a lot of incestuous bands where we're all sharing members and stuff, so we came out of that," adds Keir.

"In a small town there's not a lot else to do so we play music together. Pretty much since this band has started we've been touring as much as our finances will allow.

"We're all super in debt - if we were in it for the money we would have quit a long time ago. The thing with the tours is that they keep getting better. Our first was in 2010, and every tour and every festival since then has gotten progressively better, which is pretty rewarding. If we didn't have to pay rent, we'd be on the road ten months of the year."