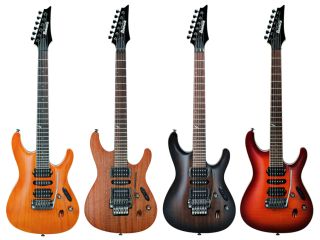 Ibanez's S or 'sabre' series of electrics has seen many new models in its twenty-plus years of existence, but the company has now launched a relatively substantial redesign to the line's high-end 'Prestige' guitars.

The S series was originally designed as an all-round player's guitar - not as 'metal' as some of the company's other ranges. Still the ultra-flat D profile neck proved ideal for fans of fast playing wanting to escape the aesthetic trappings of traditional metal guitars. The new S5470 Prestige increases the fret count from 22 to 24, allowing two octaves of same-string mayhem, which, again, is likely to be popular with shredders.

The guitars also feature newly designed Ibanez pickups, designed to "coax even more mahogany warmth and fatness out of the body." The bridge humbucker also sports a hot-rail at the neck end coil rather than conventional pole-pieces.

Ibanez's ZR (Zero Resistance) double-locking trem system gets a makeover; the new ZR2 retains the ball-bearing pivot point, but adds a snap-in (rather than screw in) arm. The spring system is also upgraded, with Ibanez claiming the new ZPS3 provides even more tuning stability than its predecessor.

Also added to the range is the new SV Prestige, non-locking version that features Ibanez's SychroniZR tremolo with locking tuners, and new pickups that offer both single and humbucking tones.

As we've come to expect from the line, the three available finishes are stunning.

Both the S Prestige locking trem and SV Prestige non-locking trem models have an RRP of $1733.32, which includes a deluxe hardshell case.