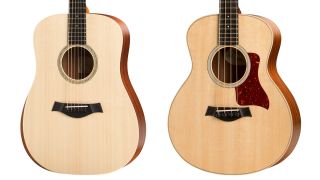 NAMM 2017: This looks set to be a big year for Taylor, as the American acoustic guitar giant joins the mid-range guitar market with the Academy Series, while also unveiling the GS Mini Bass and high-end 800 Deluxe Series.

Each guitar is well-spec'd, too, with layered sapele back and sides, a solid Sitka Spruce top, the patented Taylor Neck, mahogany armrest, matte finish, plus ES-B electronics and a Taylor gigbag.

All that promises to make the bass easy to play, while an ES-B pickup and preamp, as well as layered sapele back and sides, solid Sitka spruce top, matt finish and hard bag round off the spec.

Three Deluxe models have been introduced, and are available now: the Dreadnought 810e DLX, the Grand Concert 812ce 12-Fret DLX, and the Grand Auditorium 814ce DLX.

For more information on all of the guitars, check out Taylor Guitars.