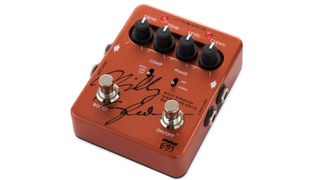 NAMM 2016: The original Billy Sheehan Drive was no slouch, garnering both awards and fans on its original release.

Now makers EBS claim to have bettered the Drive, adding more gain and a Boost footswitch. You can also now customise the pedal by replacing op-amps yourself...

PRESS RELEASE: Following the multiple awards of the original Billy Sheehan Signature Drive, the Signature Drive deluxe is a fully analogue pedal with the ability to customise your own signature drive via user replaceable op-amps.

The new Billy Sheehan Drive Deluxe offers significantly more gain than the original version. It is also equipped with a Boost footswitch for the Drive to really push the gain to the extreme when needed. The level of boost can be adjusted internally by a trim pot.

This new feature changes the character of the sound a lot. By activating the inverted phase you will notice significant more low-end when using the drive compared to the original pedal.

There are a lot of drive pedals that are considered to be classics. Many of them use some variation of a standard type of op-amp circuit design called an '8-pin dual inline op-amp'. The new EBS Billy Sheehan Signature Drive Deluxe offer the user the ability to change this chip to one that offers different characteristics to the Drive effect.

A list of suitable chips will be listed on the EBS website, and there might be a few different EBS branded chips coming later as well. The chip is accessed easily by removing the bottom plate of the pedal. It's attached to the board by an IC-standard socket, and does not require any soldering tobe swapped.

You can still benefit from the super cool Drive and Clean Loop features. Use the Clean Loop to send a clean signal to an octave pedal and obtain optimized tracking while the Drive channel is still in use. Or put an Equalizer in the Drive Loop to fine tune your distortion character. There are countless options to use these loops in creative ways; these are only two examples to get your mind spinning.

The Billy Sheehan Signature pedals comes with a built-in compressor that you can leave off, in Mid or High position. The compressor helps to maintain definition of tone while youíre using heavy distortion. It also helps to blend together the distortion and clean tone better. There are two internal trim potís that let you change the Threshold value and adjust the level of compression in the MID position.

The pedal can be powered by a 9V DC battery or an or EBS AD-9+ Power Supply (not included).

The EBS Billy Sheehan Signature Drive Deluxe is expected to ship in Q2 2016 at a price point still to be confirmed.