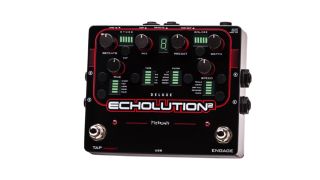 This box has all the delay you'll ever need at your feet.

The pedal, which is the result of a lengthy design process and is being touted as Pigtronix's 'flagship' unit, is a 'delay system' that incorporates analog tone shaping and digital signal processing.

A sequel to the wildly successful Echolution pedal, the Echolution 2 Deluxe has more features than you can shake a delay-drenched stick at. Check out the full specs below, and prepare to be impressed...

Pigtronix has begun shipping their new flagship Echolution 2 delay system. This ground-breaking pair of new pedals is the result of an intensive, four-year design process aimed at forging a unique marriage of analog tone shaping and digital signal processing to deliver the ultimate delay pedal experience.

The original Echolution (released in 2006) has been used on tour and in studios by Aerosmith, Living Colour, Nine Inch Nails, Guns 'n Roses, Dream Theatre, Soulive, Weezer and many other top artists. Echolution 2 maintains the renowned ambient richness and line-level headroom of its predecessor, while offering a vastly expanded palette of delay effects in a completely programmable, MIDI-controllable package that is both smaller and more affordable.

Echolution 2 has a 24-bit, variable-clock, full-stereo delay line that creates echoes from 10ms up to 10 seconds long. Any two subdivisions of the master delay time can be selected to create an array of polyrhythmic multi-tap patterns including the Golden Ratio. The resulting echoes are then further animated by 8 different filter modes, multiple LFOs, freeze, reverse, bit-crushing and totally original cascading octave effects created by the HALO and JUMP functions. Musicians can exert real-time control via assignable expression pedal and envelope mapping for every knob, as well as complete MIDI control of every function.

"The release of this pedal marks the 10-year anniversary of Pigtronix." says company president David Koltai. "Echolution 2 incorporates everything we have learned from a decade of effects design and customer feedback to create a uniquely powerful sound design tool."