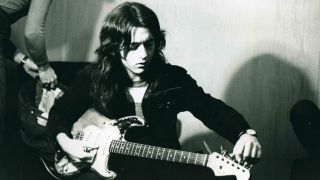 One of the mutual objectives of the "Rory pickups 2013" was that they had to be authentic. To this end, Armstrong flew to the UK to examine Gallagher's gear and measure the pickups. Gallagher's gear included his 1966 Fender Telecaster and legendary 1961 Fender Stratocaster. Armstrong's measurements zeroed in capturing electronically the tone Gallagher etched into his performances, live and on record.

Maintaining Gallagher's distinctive pickup originality, Armstrong will be creating both Alnico 3 and Alnico 5 magnet versions in the 2013 pickup sets. The Alnico 5 magnet sets will "re-create the tone" in each of the pickups - sounding like it came off the production line. This version will bring the player/customer back to the Rory Gallagher Taste period circa 1966. The Alnico 3 versions will represent tones comparable to Gallagher's later period. Both versions give players one of the key ingredients to re-creating on their own, Rory Gallagher's unique tone.

Each Rory Gallagher - Kent Armstrong hand-wound pickup set will be built at Kent's Vermont facility - WD Music Products, based in Ft. Myers, FL will handle all the business aspects (wdmusic.com).