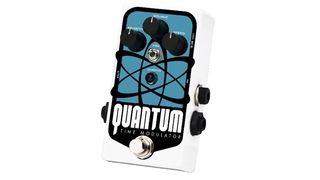 NAMM 2013: Pigtronix has struck a bold claim for inter-dimensional guitar effects with its latest pedal, the Quantum Time Modulator.

It might sound like something from Star Trek, but the Quantum Time Modulator is actually a flexible modulation pedal, albeit one that may result in accidental meddling in the time-space continuum. So be careful.

Pigtronix Quantum Time Modulator produces a parallel universe of analog time stretching effects with only three knobs and a single switch. Reflecting the fundamental principals of modern atomic physics in pedal form, the Pigtronix Quantum can be in any number of places at once and will change in response to both input and observation.

Pigtronix Quantum utilizes multiple bucket brigade delay lines with independent clocks modulated by a continuous blend of envelope and LFO sources. The corresponding sensitivity, speed and source controls are augmented by a Chorus / Vibe switch which allows the user to choose between pure effect or a mix of clean signal and modulated audio. This eminently flexible, yet easy to use configuration, combined with a TRS stereo output provides numerous sound field configurations for mono, true stereo, wet / dry and wet / dry / wet rigs.

Going well beyond the event horizon of existing modulation pedals, the Pigtronix Quantum slams the classic tones of complex rack units such as the Zappa's MicMix DynaFlanger, Lifeson's TC 1210 Spatial Expander & the venerable Roland Dimension D into a tiny and affordable analog stompbox while also blazing new territory that provides a musical analogy to the essential nature of reality itself.

Come experience the Quantum Time Modulator for yourself at NAMM Booth 5218.