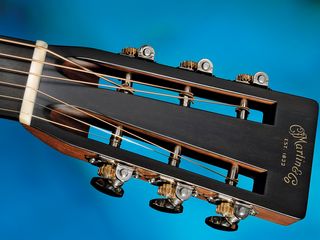 Attendees visiting the Martin Guitar booth (Booth 5454 Hall B) will be able to have the chance to preview the new releases that include: an expansion of the highly successful Performing Artist Series instruments, Custom Series, Road series, refinement of the D-18 model, and several new ukulele models, spinning on the heels of the successful run of ukulele models revealed last year.

Martin Guitar has been a leader in sourcing alternative wood species for over two decades and the company's continued commitment to responsible guitar building will be on display at this year's show. The GPCPA4 Sapele features FSC Certified Recycled Sitka Spruce reclaimed from dismantled Canadian bridges and is finished with a polished gloss top. Includes Fishman F1 Analog electronics and a hardshell case.
(MSRP: $1799)

Inspired by a 1929 Ditson 111 that resides in the CF Martin museum, the CS-D18-12 is a 12 fret Dreadnought with a body constructed of mahogany reclaimed from rivers in Belize. Commonly referred to as "sinker mahogany," these logs sank to the bottom of a river that was used to transport them and have been lost for over 100 years.

Hot hide glue was used to construct these instruments which also boast a T-bar trussrod, slotted headstock and Adirondack spruce top. Also included on the CS-D18-12 and new for 2012 is the Custom Shop Thin Finish package. This nitrocellulose finish is 40 percent thinner than the standard CF Martin nitrocellulose finish. Only 75 of these instruments will be made for the world in 2012.
(MSRP $6499)

The CS-D28-12 is a gorgeous 14 fret Dreadnought highlighted by its Cocobolo back and sides, and Adirondack spruce top. Cocobolo is a rare and dense tonewood from Mexico that delivers beautiful bell-like tones. The custom model features two way trussrod, forward shifted and scalloped bracing along with herringbone trim. Also included on the CS-D28-12 and new for 2012 is the Custom Shop Thin Finish package. This nitrocellulose finish is 40 percent thinner than the standard CF Martin nitrocellulose finish. Only 125 of these instruments will be made for the world in 2012.
(MRSP $6999, $7249 for sunburst)

The Mamas And The Papas Custom Artist Edition

Winter NAMM attendees will see the recently-announced The Mamas And The Papas Custom Artist Edition - a new 14-fret Dreadnought crafted of rare premium tonewoods. The top is made of Carpathian spruce, solid Madagascar rosewood on the back and sides, with a neck carved from genuine mahogany.

An ebony head plate features The Mamas And The Papas' silhouettes inlaid in solid mother of pearl directly above the nut. Each guitar is equipped with MSP7200 medium gauge phosphor bronze Martin SP Lifespan strings and will be limited to no more than 100 special instruments.
(MSRP $4999)

Also on display at NAMM will be the company's expanding and successful line of Martin SP LIFESPAN acoustic strings. This will include the new 12 String, Baritone and two Extra Light offerings that were launched this fall.

Introduced in the fall of 2010, Martin SP LIFESPAN is the fastest growing product in the acoustic string market. The SP core wire is engineered to hold tunings better than other brands and resist breaking, and with rich full tone and responsive attack, SP strings are perfect for everywhere from studio to stage. Treated with Cleartone proprietary technology, Martin SP LIFESPAN string sets bring players the longest possible string life without sacrificing the legendary tone or natural feel for which Martin Strings have become known.