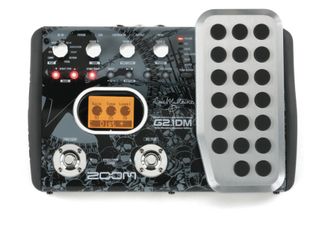 Mustaine: "This pedal is built for action"

NAMM 2011 PRESS RELEASE: Zoom is pleased to announce the addition of guitarist and lead vocalist Dave Mustaine of the iconic band Megadeth to our family of artists.

Mustaine has been a mainstay in the metal community for over 25 years, having formed Megadeth in 1983. Internationally acclaimed as one of the greatest metal guitarists in the world, Mustaine is also an accomplished producer.

Mustaine and Zoom will introduce the all-new G2.1DM Dave Mustaine Signature Edition Guitar Effects Pedal at a press conference on Saturday, January 15, 2010 from 1:00pm-1:30pm at the Zoom booth (#5940).

"This pedal is built for action," declares Mustaine. "With my personal sound effects and a large expression pedal modeled after the accelerator of one of my favorite sports cars onboard, the G2.1DM leaves all contenders at the starting line."

2010 was a huge year for Mustaine and Megadeth. It marked the 20th Anniversary of Rust In Peace, considered one of the most influential heavy metal albums of all time. Megadeth also performed as part of the "The Big Four" tour in Europe alongside Metallica, Slayer and Anthrax, as well as the "American Carnage" tour. And 2011 is expected to be even bigger.

"It's been a honor working closely with Dave on this new pedal," says Mark Menghi, Artist Relations Director. "Zoom has been fully-committed to capturing his thrash metal guitar sound in the G2.1DM. We are excited to be unleashing it on guitar players everywhere."

Visit www.megadeth.com for more information on Dave Mustaine or to see the band live on tour and hear those Zoom thrash metal guitar effects.